While many Charlton fans’ pre-season visions of glory under the Wembley arches remain a very real possibility – albeit in the EFL Trophy – many will remain deeply disappointed about their side’s League One fortunes.

Perhaps most frustratingly, the Addicks have shown they can beat anyone at this level – Plymouth Argyle’s three-month unbeaten run was ended in SE7 while Ipswich Town and Sunderland have all fallen to the sword.

A truly woeful start to the season under the guidance of Nigel Adkins continues to plague and cast a shadow over Johnnie Jackson’s resurgent side. They are likely condemned to another year languishing in English football’s third tier with merely half a season of football played.

The great irony of Jackson’s early dazzling start as Charlton manager is that his side are further away from the coveted sixth-place spot than when he replaced Adkins.  Recent losses against fellow play-off hopefuls Wycombe and Plymouth shattered the Addicks’ rise up the table, leaving them 14 points adrift.

But is the gap unassailable? Can Jackson avert his side drifting towards mid-table monotony and mount a genuine charge up the table?

To gauge the likelihood of success, Sam Ford looks where Jackson needs to bolster his ranks with new recruits, got the perspective of the Charlton Live team and consulted the fans.

But first, and perhaps most importantly, let’s establish what points haul Charlton need to pull it off.

With 29 points to their name, the task confronting Jackson is mammoth.

The average number of points won by League One’s sixth-place team over the last full 10 seasons is 73. Over the last 15, it is even grimmer reading – some 75 were required to claim a place.

If they have any hope of salvaging a play-off spot, therefore, Charlton must at the very least make up a 44-point shortfall. 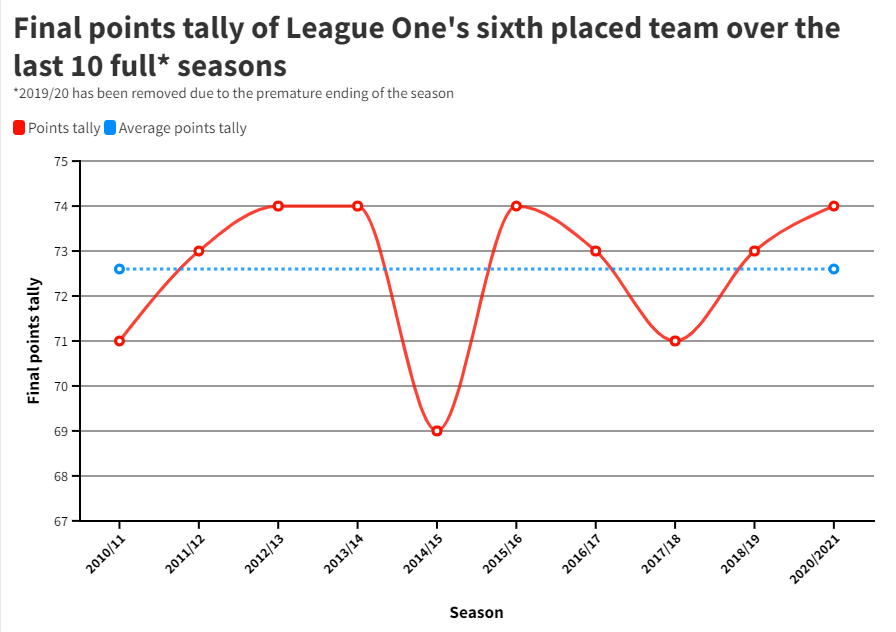 With 66 points to play for in the side’s 22 remaining games, the Addicks’ best-case scenario is 13 wins and five draws. This gives Jackson scope for a mere four more losses.

We only have to look back to Charlton’s own seventh-place 74-point haul last season, however, to see that even this may not be sufficient to bridge the gap.

Setting aside the gloomy forecast, if Jackson is to achieve such a feat he will need fresh blood to propel Charlton up the table.
With almost half the January transfer window behind us, let’s turn to the key deals Steve Gallen will be looking to conclude by the end of the month.

BEEFING UP THE MIDFIELD

With the recent departure of Harry Arter to Nottingham Forest freeing up a loan slot, one area Charlton may be looking to bolster is their midfield. Elliot Lee, who has played 1,031 of the 1,080 minutes of league football under the Jackson regime, is set to see his contract expire in the summer. The permanent signature of the 27-year-old Luton Town loanee could prove a quality addition and would vacate another loan space to bring in more reinforcements on the cheap.

THE QUEST FOR GOALS

With Jayden Stockley and Conor Washington out with injuries – and a meagre one goal in the last four games – perhaps the greatest area of concern for Charlton is their attack. Only once have the Addicks conceded more than one goal in a league game under Jackson, with games generally close-run affairs.

Sunday’s defeat to Norwich is merely the latest example when Charlton have lacked the quality up front, despite creating chances.  Speaking to CharltonTV after the FA Cup loss, Jackson cut a dejected figure despite his team’s commanding performance: “I feel like I’m stood here after the Wycombe game all over again. I can’t keep standing here saying we’ve dominated the game, got great chances, great situations and haven’t scored a goal again. We have to address it.”

Top-scorer Stockley being sent to a specialist to assess the extent of hip problem does not bode well and merely emphasises the urgency of the situation.

A score of first-teamers’ contracts are set to expire in June. The club cannot allow core players of Washington or Ben Purrington’s calibre to potentially depart for free if Charlton have genuine promotion aspirations.

THE VIEW FROM THE TURNSTILES

The North Upper’s Dylan Payne, who watched his first Valley game in 2000 at the age of four provides the view from the turnstiles.

Handed the number 10 shirt on the eve of the season, the 2021-22 campaign promised to be the season Morgan cemented his place as a consistent starter. Following Adkins’ departure, however, Morgan has struggled to force his way into the starting 11.
Jackson himself was critical of the academy graduate following a poor showing against Leyton Orient back in November: “I want him to be smarter in his play and his positioning. He needs to grab these opportunities and he needs to continue training hard and try to convince me he should be in the league starting 11.”
After another 90 minutes languishing on the bench on Sunday, a loan move may provide Albie the minutes he so desperately needs.

With Mason Burstow bursting into the first-team picture, Davison has dropped down the pecking order. Having been benched in both the last cup games, you can’t help but fear time is running out for the hitman. With his contract set to expire in the summer, the club have a decision to make.

The return of long-term absentees Ryan Inniss and Adam Matthews leaves Charlton with six players who can play in the back three. Sam Lavelle is also close to a return, only adding to Jackson’s selection headache. While Jackson’s preferred 3-5-2 demands an abundance of centre-halves, a player of Elerewe’s potential ought to get some men’s football under his belt, although a recent injury may delay a possible switch.

VIEW FROM THE STUDIO

The Addicks head to Gresty Road to face 23rd-placed Crewe Alexandra on Wednesday. If there is any outside hope of nicking a play-off spot, this is precisely the sort of fixture Charlton can ill-afford to drop points in.