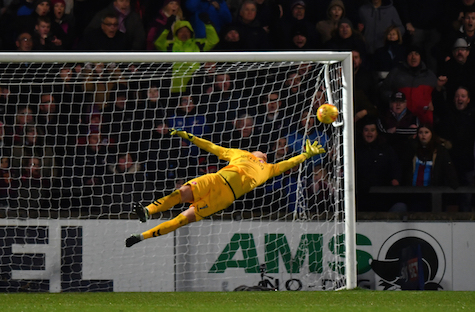 BY KEVIN NOLAN AT GLANFORD PARK

With a single point separating them in fourth and fifth places respectively in League One, it was safe to assume that Scunthorpe United and Charlton would be evenly matched. And so it proved for nearly an hour in chilly North Lincolnshire, during which the visitors were marginally the better side. A moment or two of inspiration was need to tip the balance one way or the other. And in half-time substitute Josh Morris, United had a player capable of doing just that.

A respectable stalemate – more than likely scoreless – seemed the likeliest outcome until Iron boss Graham Alexander decided that it was time to re-introduce Morris after his recovery from a niggling hamstring strain. To Charlton’s chagrin, Scunthorpe’s main man appeared for the second half to destroy them with two fantastic goals struck within three minutes of each other.

According to a disgruntled Karl Robinson, his side “were unlucky that they both came against us in one game.” Nothing unlucky about it. At some point, Alexander’s ace-in-the-hole was bound to be summoned from the bench. By that time, Charlton’s first-half superiority should have seen them at least a goal to the good.

Arguably League One’s outstanding player last season, the local word was that Morris, though with six goals to his credit, had been struggling to reproduce the same form this time around. Which no doubt came as surprise to the Addicks, who were demolished by two stunning strikes they could do nothing to prevent.

The alarm bells began ringing for Charlton when Jake Forster-Caskey, in hot pursuit of Murray Wallace, brought his quarry down five strategic yards short of the penalty area. The presence on the ball of Hakeeb Adelakun was no more than a distraction because, as feared, Morris’ wand of a left foot guided the free-kick beyond Ben Amos’ despairing dive and sweetly inside the far post.

The dumbfounded South Londoners were still absorbing the blow when Morris rubbed salt into their wounds with an even better goal. Cutting inside from the left touchline, he established his two-footed credentials by bending an unstoppable right-footed drive into the far corner. Apart from one or two neat touches, the sharpshooting midfielder contributed little else. He’s probably not even fully fit yet. But he was the difference between two useful sides and had already earned himself recognition as man-of-the match.

Beaten fairly and squarely by opponents who were able to call on that slight edge in quality, Charlton are looking a little frayed round the edges lately.

Their deflating inability recently to exploit the late gift handed them by Milton Keynes was quickly followed by a thoroughly unconvincing midweek victory over lowly Rochdale, which saw them unapologetically hanging on to the narrowest of leads against struggling relegation candidates.

Slick and pacy, the Addicks had shown enough in an entertaining, evenly-matched first half to suggest they had it in them to work out a reasonable result. Only the excellence of Scunthorpe keeper Matt Gilks denied them an interval lead.

Gilks’ faint touch as Josh Magennis met Ricky Holmes’ perfect centre was enough to divert the centre-forward’s intelligent header on to his left-hand post and away to safety.

The effervescent Holmes was also the architect of an even better chance for Mark Marshall a few minutes later. Alertly intercepting Clayton Lewis’ pass in his own half, he turned defence into breakneck attack with an irresistible burst of speed and adhesive ball control. Timing his pass astutely, he sent Marshall through with only Gilks to beat. Leaving his line to narrow the winger’s angle, the keeper blocked the shot with a shrewdly deployed foot.

Amos had been similarly busy. His electric reactions kept out Tom Hopper’s forceful header which appeared certain to convert Paddy Madden’s cross. He distinguished himself again soon after resumption by smothering Duane Holmes’ volley at his near post but was left helpless to stop either of Morris’ wonder strikes.

But this was no duel of keepers. It was in fact resolved by the sheer class which Alexander, when he turned to his bench, had available to him. He was well served by 16th minute substitute Holmes, who stepped up nobly to relieve stricken right back Jordan Clarke but, in Morris, he was able to unleash a force of nature.

Robinson enjoyed no such options on what must rank as the thinnest bench to represent Charlton for some time.

His squad is starting to look decidedly threadbare, a handicap which no doubt explains the premature departure of Patrick Bauer, a decision which, at the time, smacked of surrender but which instead might be considered as sensible intent to fight another day.

That day is tonight, when Peterborough come to town. It’s a bit early in a crowded campaign to refer to “must-win” games but ” can’t lose” springs to mind. It’s already come to that.