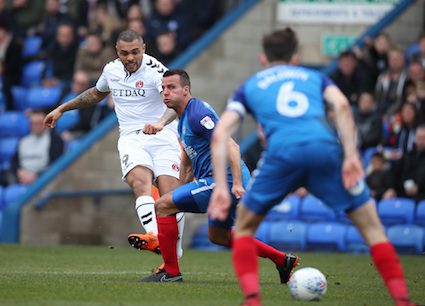 The Northern Ireland international was the subject of multiple bids in the January window as Bolton Wanderers failed to get a deal done.

And Addicks caretaker boss Bowyer reckons it is only natural that Magennis and centre-back Patrick Bauer, who has attracted the attention of Championship new boys Blackburn Rovers, will be courted.

Bowyer told Valley Pass: “We had people interested in Pat in the summer – it happens. There’s gonna be interest.

“There’s gonna be interest in Josh Magennis. He is a Northern Ireland international, of course they are going to be interested.

“If they have the chance to go and play in the Championship I couldn’t begrudge them wanting to do that.”

Bowyer has spelled out that bringing in at least one central midfielder is a priority.

His first ever signing as manager was an impressive one as striker Lyle Taylor signed on a free transfer from AFC Wimbledon. But midfielder Abu Ogogo opted to join Coventry City after his Shrewsbury Town deal ended.

“We need a centre-midfielder, for sure at least one,” said Bowyer. “We have only got two in the building – Joe Aribo and Jake Forster-Caskey. We have got young lads coming through, but are they ready yet? Taylor Maloney and George Lapslie are next in line, but they are not ready.

“We have to bring in a physical centre-midfielder. Are there many out there? Not really.

“In an ideal world if we lost Igor Vetokele or Josh Magennis then we would like to bring in another top striker.

“We got Lyle Taylor in the building, which I thought wasn’t going to happen. We have got an outstanding striker.”

“I went and met Lyle and I went and met Ogogo. Unfortunately that didn’t come off – he chose to go to Coventry. You are trying to persuade these players why we are the right club for them.”

The full Valley Pass interview can be found here https://www.cafc.co.uk/valley-pass/video-player?widgets[stream-amg][content_id]=0_jspeh69b