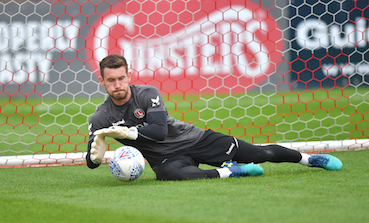 The on-loan Aston Villa goalkeeper started his first League One game for the Addicks after also being between the posts for the EFL Trophy tie against AFC Wimbledon.

“I watched Jed on Tuesday night and he was outstanding with his feet,” said Bowyer. “We knew Wycombe would make it difficult, playing the way they did against Luton.

“I knew it would be difficult for us to play out from the back. I watched Jed on Tuesday and he is good with his feet, like another [outfield] player – he can either play out to the full-backs or bypass midfield and drop into the striker. That’s why he played.

“His distribution is better than Dillon’s. That’s why I played him.”