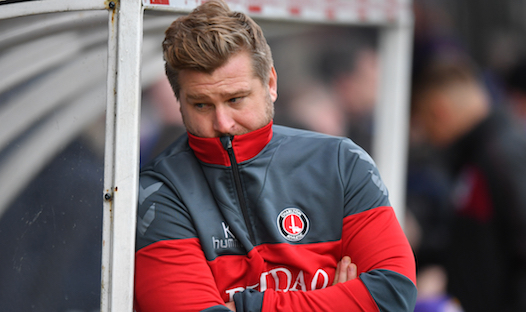 Karl Robinson has insisted that he should not be the focus when Charlton Athletic face AFC Wimbledon in the FA Cup on Sunday.

The winner of the tie at the Cherry Red Records Stadium will book their place in the third round of the competition.

Dons fans abused the Liverpudlian, 37, who spent six years at detested rivals Milton Keynes. Robinson had a security presence allocated to him when Charlton drew last  season’s away League One game in February.

He had to be held back after a member of Dons’ staff made a comment to him after the final whistle.

section adding at the time: “We will do our utmost to prevent a repetition.”

“I’m looking forward to the match – but it is not about me,” said Robinson. “It never has been. I’m not worrying about what the consequences are for me. It is about Charlton playing Wimbledon, that’s the most important thing. There shouldn’t be any problems – because it’s a football match.

“People can dislike people. Someone decided to say something last time but apart from that it wasn’t a problem, I never had any problems with other staff around the building.”

Charlton could be without eight first-teamers for the derby with Patrick Bauer forced off in Tuesday’s 2-2 draw against Peterborough with a foot injury.

And the Addicks are not helped by their EFL Trophy tie at Swansea City just over 48 hours later.

“A lot are contact injuries that happen in games,” said Robinson. “Because we have had one or two earlier on in the season we have overplayed one or two.

“But it is what it is, we can’t sit and mope about it. We’ve got to dust ourselves off and go again.

“The Swansea game is a headache in terms of the scheduling.

“The fact the FA want to move our game to Sunday is a bit frustrating as we wanted it to be Saturday to give us maximum opportunity to recover. We’ve got another game the following weekend. I will make a lot of changes for the Swansea match.”

Jason Pearce (knee) and Harry Lennon (groin) are set to play 45 minutes against the Swans’ under-21 side.