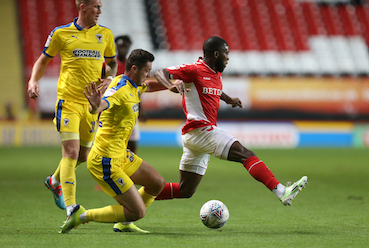 He was dropped for Saturday’s 2-1 win over Southend United, but Charlton boss Lee Bowyer was pleased with how Mark Marshall reacted during the EFL Trophy tie with AFC Wimbledon.

The 31-year-old winger was left out of the Addicks squad for the trip to Roots Hall, but came back in to play all ninety minutes of the 2-2 draw with the Wombles on Tuesday evening.

“That’s what I want to see,” explained Bowyer when asked about the former Bradford City man’s display.

“Sometimes I see it, sometimes I don’t. He wasn’t in the squad on the weekend and it would have hurt him. He couldn’t do any more than what he did tonight, giving that performance. That’s what I want from him. It’s not personal for him or anybody. If you’re not performing, you’re not involved. You’ve got the young lads – George (Lapslie), Albie (Morgan), Taylor (Maloney) knocking on the door. If they’re doing better than you, they will be involved.

“I don’t care how old you are, how experienced you are. If you’re not performing, and that’s not just Marsh, it’s for everyone. That goes across the board. All the players know it. I’m over the moon for Marsh.”

Bowyer also provided an update of the fitness of defender Patrick Bauer, who had been withdrawn after an hour of the win over the Shrimpers on Saturday.

“Patrick Bauer was violently sick at half-time and then got dizzy,” he said.

“He then basically couldn’t carry on. Once he came out after half-time he didn’t look himself. He laid on the floor and said “I’m dizzy.” So, we said that was it, we knew we had to get him off then. He trained today and was excellent. Yesterday we sent him home as he didn’t feel too good. He came in today and he was good. The lads trained this afternoon and he was excellent.”