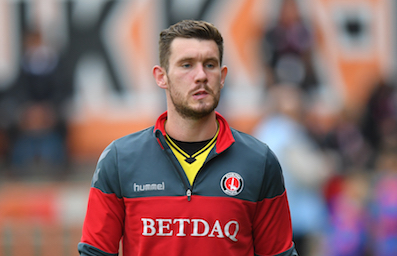 Lee Bowyer has revealed some of his starting line-up for Charlton Athletic’s EFL Trophy tie tonight – confirming there will be a debut for loan goalkeeper Jed Steer.

The shotstopper arrived on loan from Aston Villa just before the season started but has been back-up to first choice Dillon Phillips.

But Bowyer confirmed to The Mercury that Steer will start against AFC Wimbledon.

And he does not expect to fall foul of the competition’s rules which see a four-figure fine handed out if the Addicks do not name enough first-team regulars.

“We are fortunate really because we have got injuries coming back and those players need minutes,” said Bowyer. “So they’ll play.

“Ben Reeves will play and Mark Marshall needs to play. George Lapslie will start and so will Taylor Maloney, who has been with us all pre-season. Naby Sarr will play and Jed will be in goal, it’s a good chance to see him.

“Igor [Vetokele] will start. Again, he hasn’t played any serious minutes since Welling United in pre-season.

“So we will have a half-decent side out.

“Don’t get me wrong, if we had the situation of this game three weeks ago then I wouldn’t have been able to play some of these boys because I was down to the bare bones.

“The only reason I can play all these lads is they need minutes to get back from injuries.

“The most important thing to me is the league. I wouldn’t want to risk some of the boys who have more chance of starting on Saturday.

“Pearcey [Jason Pearce] has just come back and in an ideal world he would play. But asking him to go Saturday-Tuesday-Saturday after being out for a few weeks – I don’t think you can take that risk.”