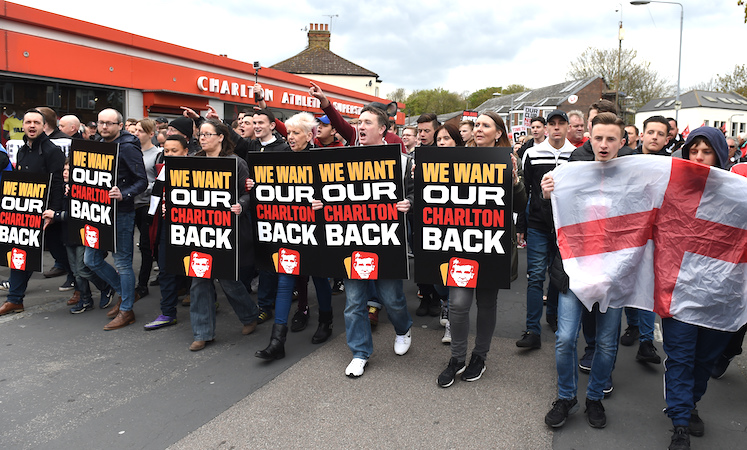 Charlton Athletic Sport
13 February 2018 Richard Cawley 0 Comments
By Richard Cawley
richard@slpmedia.co.uk
Charlton Athletic supporters need to show a united front when a takeover deal for the League One club is completed.
That is the call from Voice of the Valley fanzine editor Rick Everitt, who has also been a key part of the CARD [Coalition Against Roland Duchatelet] protest group.
Duchatelet confirmed before Christmas that he was in talks with interested parties over selling the South London club.
During the Belgian tycoon’s time at the helm – although he has been a virtual recluse when it comes to
attending matches – the Addicks have suffered relegation from the Championship with home crowds heavily down.
There have been strong suggestions that a takeover is close but it is unclear who is in pole
position to  purchase the League One outfit from Duchatelet.
CARD have produced a number of high-profile demonstrations which have attracted media
attention as they tried to coerce Duchatelet to move on.
Everitt said: “Whoever or whatever it is, everyone needs to come together and get behind the club because we have been too divided for too long.
“I think there is widespread recognition that there needs to be a united front.
“The problem is that the last two ownerships haven’t been focused on winning football matches. If it has been about making money out of property deals or trading players, who knows?
“It doesn’t matter if you want to make money, you also clearly need someone focused on winning games on the pitch. If you don’t have that then everything else breaks down and you get the kind of mess that the club has been in for the past eight years.
“We can’t demand people come in and spend lots of money but you have to believe they share the same ambition as you.
“We had that through the 1990s and 2000s – that gives you a chance.”
Any new owner will have to work with the current squad after the January transfer window closed and the Addicks are in a major fight to even secure a play-off place. They are guaranteed to jump back into the top six if they can beat Bradford City at The Valley tonight.
The Bantams appointed Simon Grayson as their new manager on Sunday. Stuart McCall was axed after a run of six straight losses.
Charlton could be boosted by the return of Jason Pearce to their matchday 18.
The centre-back – first choice when fit – has been missing with a knee injury but Addicks boss Karl Robinson has admitted he could be fit enough to take a spot on the bench.