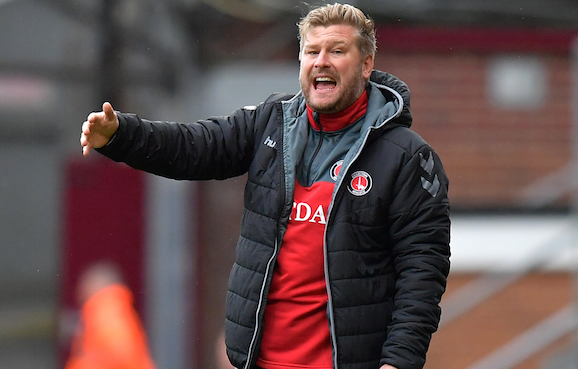 Charlton manager Karl Robinson pits his wits against Neal Ardley tomorrow – and reckons AFC Wimbledon will never have a better boss at the helm.

The Addicks are unbeaten in six League One matches and favourites going into the derby meeting in SE7.

Robinson freely admits to being a fan of Ardley’s work. The former Dons midfielder led them to League Two promotion via the play-offs in 2016 and they finished comfortably clear of the dropzone last season despite lacking the financial spending power of nearly all of their competitors.

“Neal Ardley has done one of the best jobs in football,” said Robinson. “What he has done at that football club is remarkable.

“I know he’s going to come to our place fully-motivated to compete – as he always does. We’re under no illusions how difficult it is going to be.

“It is going to be made more difficult by the quality of the manager.”

Wimbledon’s lack of goals has hampered their progress in the current campaign. Before the 1-0 win at Northampton on October 14 they had gone four fixtures without hitting the back of the net.

Ardley has not been immune to criticism from supporters.

“It doesn’t surprise me – that is the way football goes,” responded Robinson. “Maybe it is a little bit like me [at Milton Keynes]. When you spend so long at a football club, people don’t see the success over a period of time – they just see where you are at that immediate four or five-game period.

“It’s about stability. Stability in League One is a must if they want any hopes of getting into the Championship in the future.

“If you want someone who knows the football club inside and out – who lives and breathes it – you’re not going to get a better manager. He is that good.

“At any club you are going to get people who like you and don’t like you. It’s part and parcel of the job.”

Robinson was the subject of abuse in the fixture at the Cherry Red Records Stadium in February – and had to be restrained by some of his own staff at the final whistle following comments made by a member of AFC Wimbledon staff.

“I’ll get asked about it because of the disgusting behaviour at their place,” he said. “It stems from my seven years at a club they hate and one I adored for that period of time.

“Because of the passion and loyalty I showed, they don’t like it.

“Whenever I say anything it is completely taken out of context. You could say exactly the same thing as me and I guarantee they’ll take my version a lot harder than yours.

“It’s something that will never ever go away from me while I’m in the game.”

This weekend could be Charlton’s last League One action until November 18, when Robinson’s previous club come to South London. The previous weekend’s trip to leaders Shrewsbury looks set to be postponed due to international call-ups for the Addicks.

“We’re on a great run – three wins in our last four,” said Robinson. “We’ve played all of the other teams in the play-off positions away and taken seven points from nine.

“As a mission statement, that’s a great stat, to know we’ve been to Bradford, Oxford and Rotherham and got that return.

“We might have a longer break than most in relation to the international break. We might not play again in the league for three weeks. If we have two games in hand and are still in the top six then it will be a great place to be.

“We have to win on Saturday to make that an achievable goal.

“We will rotate in all three cup games. Every player will get a chance to realign and reassess my thought process. The players know that at no stage is anybody secure.

“The moment you feel that you are comfortable then you’re vulnerable.

“We don’t want to win on Saturday – we must. Our objective is above where we are.”