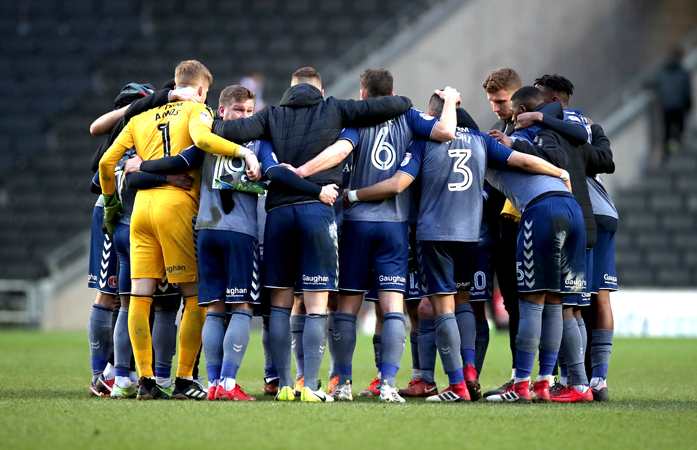 Charlton boss Karl Robinson knows his side need to deliver in their final 14 matches to secure a League One play-off spot – and says the run-in is his favourite part of the season.

The Addicks are sixth in the standings and occupy the last position that guarantees extending their campaign beyond the end of April.

Robinson, 37, has won promotion from the division before when his Milton Keynes side were runners-up in 2015.

Back then the Buckinghamshire-based club won nine of their final 10 matches, banking 28 points from a possible 30, to just pip Preston North End for the automatic promotion berth behind Bristol City.

Tomorrow they face second-placed Shrewsbury Town at The Valley.

“It is about staying calm in the run-in,” said Robinson. “Along this closing stretch there is going to be a defeat, that’s just the way the industry is.

“But I tend to find most of my teams finish quite well.

“We have a plan. We know what we have to do. We take every game as a final. I know it is a cliche, but it’s true. Once you finish that game there is nothing you can do about it.

“At this stage you can talk about style – an ethos or a plan A, B, C of D-plus – but whatever you want to call it, it is about winning.

“If you get a lucky win, you take it. You don’t moan about it. My mentality has to stay the same. This is the best time of the year. It’s where we are judged.”

The fact there has been progress made by Robinson this year is undeniable. The question is whether it will have been enough.

But this season has been played out against the backdrop of takeover talks which saw owner Roland Duchatelet not prepared to make permanent signings along with selling talismanic winger Ricky Holmes to Sheffield United.

“We’re almost on the same points we were on last season when there were only two games to go,” said Robinson. “If you take Shrewsbury out of the equation then Blackburn, Wigan and Rotherham have all kept their best players.

“Us, along with Shrewsbury, have probably had the biggest changes. We’ve cut the wagebill by millions and not spent six figures in three transfer windows. That is also something we should be proud of, in a way.

“You can see with young Joe Aribo, Ezri Konsa and the likes of Sols [Chris Solly] we have still got assets in the team. You should always have your assets on the pitch and when you do spend money it should have a massive impact on what you’re looking to achieve.”

Robinson travelled to New Meadow on Tuesday to watch Shrewsbury live. Paul Hurst’s side have been transformed from relegation battlers last season to one that has been near the top for the entire campaign.

“They are so honest and hard-working,” said the Charlton manager. “One thing I’ve noticed is their decision-making in the final third is excellent.

“A lot of things have dropped to them at the right moment but that luck is because of their work ethic and unity they show. It is one of our hardest games of the season – I’m under no illusions about that.

“They’ve not done it spending lots of money. They have done it the other way, with a small group. If you look at their injury record it is very minimal. Rotherham have only made three changes in 15 games – we do that amount every game and through no fault of our own.”

The closure of the January transfer window has brought extra stability with no further danger of losing key men. Josh Magennis – the subject of repeated bids from Bolton Wanderers – is back on the scoring trail with three goals in his last four matches.

“It’s been about getting our head down since then and saying ‘this is what we are’,” explained Robinson.

“We all know what [the takeover] is above us and is waiting in the wings to happen. But when it happens, no-one quite knows that. We can’t wait for that to happen or use it as an excuse.

“Yeah, it’s not great working in the parameters we’re working in but I’ve had constant support all along the way. It’s important we play for the fans, that’s what we have tried to do.