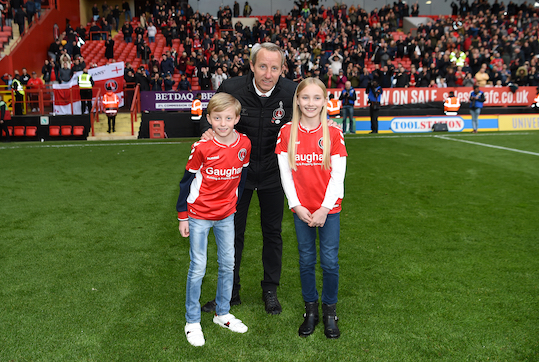 Charlton boss Lee Bowyer expects The Valley to be bouncing for tonight’s League One play-off semi-final – and admits packing out the stadium was one of his pre-season targets.

More than 24,000 home fans will be there as the Addicks look to knock out Doncaster Rovers and reach Wembley.

Charlton have made around 1,000 seats in the Jimmy Seed Stand available due to the high demand – normally reserved solely for away supporters.

The last time that the club took that measure before was a Football for a Fiver game against Barnsley in October 2012, producing a gate of 26,185.

Bowyer said: “At the start of the season I said one of the things I wanted to see was The Valley full and bouncing again. It was one of my goals – to get everyone back, the club coming back together again, moving forward and rebuilding. That’s what we’re doing.

“If I’m honest, it has happened quicker than I expected. But it is great to see something that I was driving for and wanted to achieve.

“I’m over the moon and grateful to all the fans.

“When the crowd has been good and loud this season, like the Portsmouth and Luton games, our players seem to rise to that.

“That’s what we have to do for this one, put in a proper performance. I have no doubt that we will – the players love it when the crowd are loud. This time it will probably be louder than most have experienced before.”

Charlton’s last time at Wembley was before the national stadium’s rebuild – beating Sunderland in the 1998 First Division play-off finals on penalties. A 2-1 victory at the Keepmoat Stadium on Sunday has left the Addicks as big favourites to get to the home of English football at the end of this month.

“That was a crazy final – unbelievable,” said Bowyer about the win over the Black Cats. “I’ve seen it a few times since when the club has had various dos on.

“To get to Wembley is a massive occasion. It’s a great achievement. Especially this season – no-one tipped us to get into the top six.

“If we can get to Wembley then what a day it will be for the fans and players as well. That is why it will probably be one of the proudest moments I’ll have as a manager, walking this side out there.”