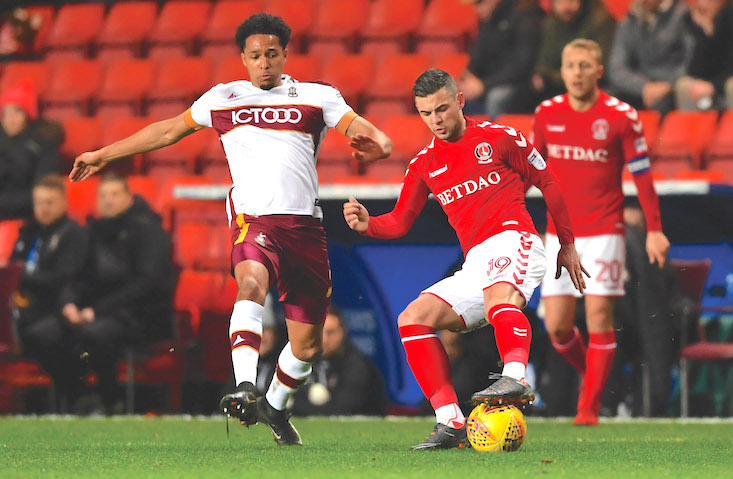 Charlton Athletic Sport
15 February 2018 Richard Cawley 0 Comments
By Richard Cawley
richard@slpmedia.co.uk
Jake Forster-Caskey has demanded Charlton find a clinical edge – with their inability to kill off opposition majorly hampering their League One play-off hopes.
The Addicks were in control on Saturday before conceding a late equaliser at Doncaster while Tyrell Robinson headed an 80th-minute leveller for Bradford City in midweek.
Midfielder Forster-Caskey said: “We need to put teams to bed, because otherwise it puts us all under pressure. When you’re 1-0 up you just naturally get deeper. I don’t think you can help that, because you’re trying to defend a lead.
“We need to score more goals – that’s evident. We haven’t scored enough. It’s not just the strikers. We all need to create more and score more.
“In both boxes we need to improve. That’s all of us. In the last three games we have conceded – that can’t just be down to luck.
“When you’re 1-0 up the other team has always got a chance of nicking an equaliser.”
Forster-Caskey believes that misfortune has also been a factor.
“The Doncaster goal was a bit of a fluke. It takes a massive deflection and lands on one of their player’s heads after we’ve given them nothing.
“Bradford – who are in the top six – we give them nothing and it ends 1-1. You’ve got to take confidence from dominating Bradford for long periods of the game.
“It was going nowhere near him [Robinson], has taken a deflection and gone straight to their player. We can’t keep being unlucky. If we play like that, we’ll definitely win games. We’ve come in quite positive, we’ve dominated large parts of that game. Particularly the first 45 minutes – we were brilliant.
“The feeling is that we did well but we needed to put two halves together. We knew they were going to come out and have a spell – they are in the play-offs for a reason.
“It’s frustrating for us, it’s frustrating for the fans. Off the back of the last game we wanted to come out and get the three points and put ourselves in a good position.We need everybody to stick together and keep on going. At the moment it is in our hands, so we can’t blame anybody else if we don’t get there. We’ll put pressure on ourselves.”
Josh Magennis got his seventh goal of the season and second this month. Previously he had been on a 14-match barren spell.
Forster-Caskey said: “He does a lot of work for other people, Josh. Sometimes he gets a bit of stick when he goes on a bit of a drought but I’m delighted for him – he deserves it. He’s a big presence up front.”