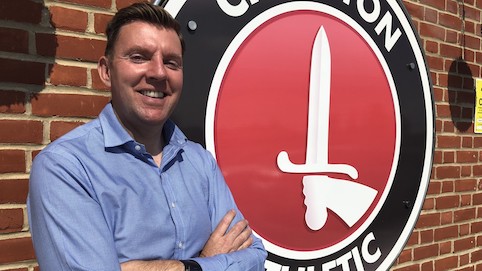 Steve Gallen is a man with a plan. And while the challenge facing Charlton Athletic this summer is a daunting one, the club’s head of recruitment reckons it was a similar story 12 months ago.

But that is only the first step in building a squad that can compete in the Championship.

Charlton only have 11 of last season’s squad contracted for the 2019-20 season. There is every chance that Joe Aribo and Patrick Bauer will reject offers to extend their stays.

The Addicks have also lost loan stars Josh Cullen and Krystian Bielik, both have significant interest after shining for the SE7 outfit last season and there are no guarantees they will return.

Gallen, 45, got plenty of credit for the way that Charlton boxed clever in the market last season.

But now the Addicks transfer chief has got to ensure the League One play-off winners can compete despite having the lowest budget in their new division.

And August 8 is the deadline for wheeling and dealing. Twelve months ago Charlton were able to do loans until the end of that month.

Gallen said: “There are times I wake up in the morning and if I think about it too much, it overwhelms me. It does, the whole situation.

“Thank God we’ve got Lee [Bowyer], because he is always there on the phone.

“Some managers at this stage go away for a month. He’s there. When I go back to last summer, in particular, there were seven or eight phone calls in a day – on the phone at 10, 11 and 12 at night. He is brilliant like that.

“I thank God I have that sort of support. You need that. There is only so much one person can do, a lot is him sealing a deal.

“Players are not worried about it, but then they sit down with Lee and they are.

“We were fully aware of this [only having 11 players contracted] a few months ago. Although we knew it was going to be a bloody difficult period and getting promoted meant there was going to be even less time – because of the day we have to be done by.

“I’ve gone to the owner about a few players and said: ‘Can I do this, this, this, this and this?’ The longest emails ever I’m sending and he has come back with his usual response – ok. I’m writing essays and he’s just writing ok. But that’s all I need. Sometimes I get a ‘proceed, no problem’ – and I do.”

Charlton will have to be cute again in their transactions as they cannot hope to compete financially with their rivals.

The disparity in their spending outlay compared to other second tier clubs will make it a greater test.

But Gallen points to August 4 2018, when Bowyer only named five substitutes for the opening day defeat at Sunderland.

“The obvious answer is to say we’ve just made the test facing us even harder,” he said.

“That would be the obvious answer. But, you know what? When we were around August last year and we played up at Sunderland we could not even fill the bench.

“This is no harder than that. I was gutted about that. This is my role and this is my job. Yes, I’ve got restrictions, everyone is aware of that. But this is my role and I can’t even hand Lee Bowyer a full bench. Is it my fault? Lee would say 100 per cent it is not my fault, I know that is what he will say to me, but I felt that responsibility.

“It’s going to be no harder than what we faced last August. We hardly had any players and internally a lot of senior players were not happy – this team isn’t going up, this team is going down.

“Lee was brilliant. Very calm – lads, be patient. Don’t worry we’ll be at the top. He bloody pulled it off as well. Some come in now laughing about it. But at that stage it wasn’t looking too rosey, because of circumstances that were out of our control.”

Charlton have been installed by bookies as one of the favourites for the drop along with Barnsley, who just pipped them for the second automatic spot.

So how does Gallen see things shaking down?

“You have to be careful with a prediction, I suppose, you never want to come over to optimistic or pessimistic.

“The simple fact is it is going to be a very, very tough season for us. But what we have got is a bit of momentum behind us. I hope that we can continue that with the first thing – the main thing – Lee signing [a new contract]. Then get the players in that we are targeting. We’re in and around the mix with them.

“Once pre-season starts, optimism comes flooding back to everybody.

“What’s a realistic position for us? Probably somewhere between mid-table and bottom. I know that league pretty well. I watched QPR a few times – Reading, Ipswich, Bolton and Birmingham. I watched all the teams down near the bottom. I always reported back. I’ve got to look at some of their players who they might be releasing for starters – just knowing we might be amongst that.

“The squad size will be important and how we deal with the physical side of things. It is a big, big difference in the Championship.

“But in terms of quality of football, we’re pretty good. Everyone would acknowledge in terms of playing good football and quality of player, we are up there. But can we cope with the physical side and the relentless games? That’s going to be the challenge for us.

“Lee’s always said he wants two players for every position. What we have to do is balance that with not bringing in 22 senior players.

“Our owner, this is part of the policy, he wants to see some young lads in there. He is delighted to see George Lapslie, Anfernee Dijksteel, Albie Morgan and Dillon Phillips playing – he really is keen.

“Is it because of the financial reasons? I don’t know. But he is keen on seeing young players get opportunities and he believes in that.

“We will have a young, enthusiastic and dynamic team.”

The former QPR development coach, who also had a brief spell as caretaker boss at Loftus Road as well as managing Hong Kong Pegasus, has seen his role broaden since the departure of chief executive Katrien Meire.

Gallen is also responsible for contract talks with the existing squad.

“There are some things I don’t enjoy,” he said. “I don’t enjoy not being at our games at times. I’m looking on my Twitter feed how we are getting on – it’s so important that we’re winning – and I might be at Stevenage v Colchester. I’m not knocking that game. It’s my job – I have to be there. I have to do Gillingham, Crawley – all those places.

“I travel all over. Lee’s always saying: ‘Bloody hell – you’re not at another game?’. Whether it is U23s, League One, Conference or Championship – that’s the job. It can be frustrating not having that direct involvement on a match day.

“There’s no doubt about it that the transfer windows are bloody hard. Really, really hard.

“I counted my phone calls [on one day last week] and there were 60 in and out – plus meetings, plus emails, plus trying to look at players. It is not easy.

“But on September 2 or September 3 last year you think ‘I don’t have to do so much for the next few weeks’. That’s strange too.

“Since I’ve taken on a bit more responsibility, as soon as the next window has closed we will try and tidy up our own players’ contracts.And, by the way, that can take months.

“Signing George Lapslie – the day of offer to him signing – was at least three months. That’s not something that gets done in a day or two. There was no rush with George, he was already under contract. Anfernee and Dillon as well, it wasn’t like it had to be done on Friday. It is ongoing discussions – that never ends.

“There are three people at a football club who I believe their jobs never end. One is Steve Avory, the academy manager. There is no end date. I did that at QPR, so I know.

“For Lee Bowyer, there is no end.

“He’s watching matches. He wants to see every team in the Championship in the next couple of weeks. He’s going to watch a game on Middlesbrough, Blackburn and QPR – the full match and take notes.”