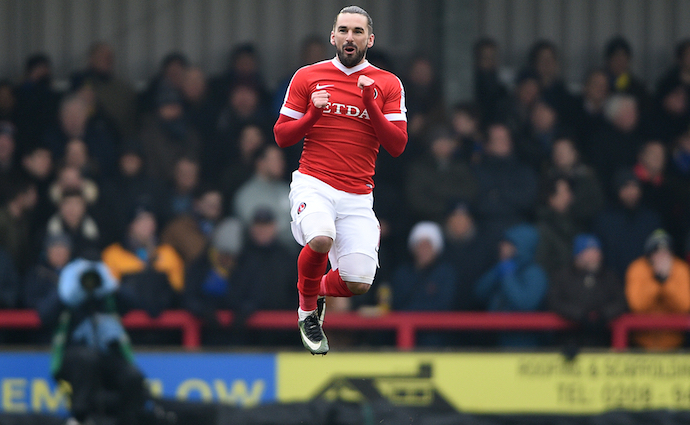 Charlton talisman Ricky Holmes had the chance to sign for AFC Wimbledon – but the lure of the Football League saw him reject their advances.

The Addicks ace comes up against the Dons tomorrow at The Valley. Holmes has revealed AFC Wimbledon were interested in him when he left Chelmsford City in 2010.

“They are a good little club. I’ve spoken before to them about signing. They were still in the Conference and I’d been in non-league and played 200-odd games by the time I was 21.

“I wanted to make it into the Football League. They tried to give me a contract but I told them I had to get into League Two, so I went to Barnet instead.

“I’ve got a big thing with their fans because they hear about what happened. Chelmsford and Wimbledon were big names in the same division. We finished above them one year to go up automatically to the Conference South and they were in the play-offs.

“Every time we played there was a rivalry. I still get a bit of stick and that was 10 or 11 years ago.

“They’ll make it difficult for us on Saturday. They’ve got experienced pros at this level who know how to win a game and wind you up.

“I know a lot of them – Andy Barcham, Lyle Taylor, Barry Fuller and George Francomb.

“The club have built a fanbase from nothing. They are good enough to be floating around mid-table or pushing for the play-offs.”

Charlton are fourth in League One but have a game in hand on Wigan and Shrewsbury, eight and 10 points ahead respectively at the top of the table.

“Any other season we’d be in the top two,” said Holmes. “They just aren’t losing. We’d have taken this at the start. We’ve got a game in hand and gone to some tough places already and got results.

“There are games we shouldn’t have lost – like Plymouth. We created more chances in that than we have all season and didn’t score.

“Gillingham was just a day to forget. We got well outplayed by Wigan. They are the team to beat.

“We can go toe-to-toe with them but they have probably got seven or eight players they could bring on that are experienced pros who have played in the Championship. Our eight are young – but hungry.

“Wigan’s quality is second to none. If we finish above them we’ll win the league.

“Shrewsbury are the surprise package, but they are going to lose at some point.”