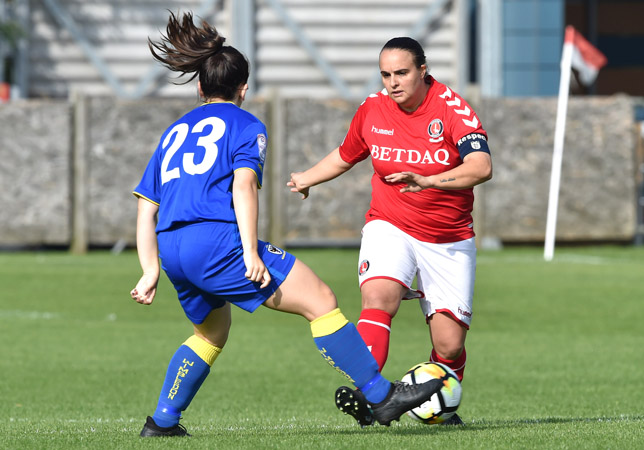 Charlton Athletic Women face a huge test in the last eight of the FA Cup after Monday’s draw pitted them away at Arsenal.

The Gunners are third in the WSL 1 table and will be heavy favourites to progress. Charlton are the only side outside the top two divisions left in the tournament and earned their spot in the next round with a 3-1 victory over Cardiff City last weekend.

Kit Graham struck twice for the Addicks along with Charlotte Gurr – all three goals coming in 10 first-half minute.

Nicole Pepper’s own goal on 53 minutes reduced their advantage.

Addicks captain Kim Dixson said: “We have to believe we can go further. It is great for us as a football club to reach the quarter-finals, just saying that is crazy in itself.

“We’ve worked hard to get here and don’t want to go out with a whimper.

“In the first half we played really well, popped the ball around and went 3-0 up quite quickly. In the second half they came at us and we dropped deeper and deeper, we put a little pressure on ourselves because we wanted to get through.

“We conceded early in that period but saw it through. We wanted to score a fourth just to make it secure but it wasn’t to be.”

Charlton’s recent 2-1 reverse to Lewes in the Premier League Cup was their first loss since October.

The Addicks are second in the FA WPL Southern Division table but have a game in hand on C&K Basildon.

“The league is the most important thing,” said Dixson. “You always want to do well in the FA Cup but the league is still the priority.

“We’ve probably been top all season, until last weekend. We haven’t played a league game for a long time because of the cup runs that we have been having.

Crystal Palace Ladies picked up a 2-0 win at Queens Park Rangers Ladies on Sunday in  the Capital Cup.

AFC Wimbledon Ladies look certs for promotion from South-East Division 1. An 8-2 win over Norwich City Ladies on Sunday sees them 11 points clear at the top.

Georgia Heasman and Katie Stanley both bagged braces with Laura Quinn-Low and Caroline Bisson also notching along with an own goal.

Millwall Lionesses were held 1-1 by London Bees in WSL 2 on Wednesday night. Taylor O’Leary struck early for the Bees but the home side quickly levelled through Rianna Dean.

Lionesses remain unbeaten and are second in the table.