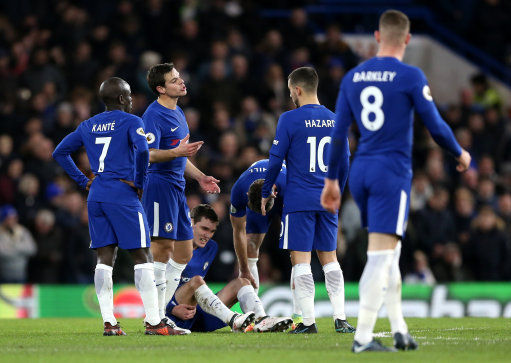 A dour 45 minutes with neither side looking confident enough to take the risk to open the scoring.

The Blues lost centre-back Andreas Christensen to a hamstring pull on 27 minutes and that just about summed up their performance – hamstrung.

With no recognised forward to play to – Eden Hazard and Ross Barkley alternating in the false nine role, Bournemouth had the easier of the work to do. Chelsea’s rearguard looked suspect on the counter-attack.

Chelsea’s best effort of the half came from the head of left wing-back Marcos Alonso. The effort inched with of ex-Chelsea goalkeeper Asmir Begovic’s left upright.

The 19th minute’s applause by the fans and Chelsea dug out to mark the death of Chelsea fan Jack Winter, 19, who died of cancer was impeccable and perhaps aided to the somewhat subdued atmosphere.