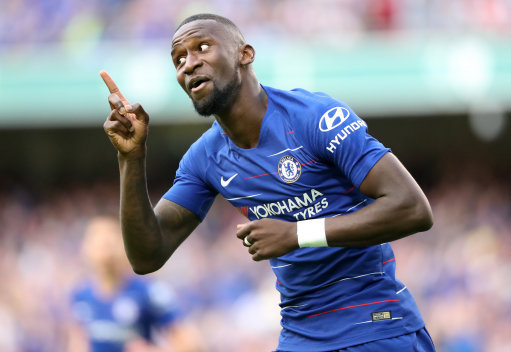 By PAUL LAGAN in Dublin

Chelsea go into the break 1-0 up in the ICC match against Arsenal at the Aviva Stadiun in Dublin tonight.

Five minutes in a Cesc Fabregas’s pinged a beauty of a left footer from the edge of the Arsenal penalty area, which ex-Blue Petr Cech brilliantly parried away for a corner. From the resultant kick, the ball by Fabregas, was met powerfully on the head of an unmarked Antonio Rudiger who zipped the ball past Cech to open the scoring.

Alvaro Morata, was saved from the embarrassment of missing a sitter on 10 minutes, having been set up by Pedro and Fabregas. The Spanish striker conspired to miscue the ball from close range. But he was narrowly adjusted to have slipped offside.

It got worse for Morata five minutes later when he missed a penalty.

Callum Hudson-Odoi, a thorn in the Arsenal flanks with his speed was hauled by Hector Bellerin in the penalty area.

Up stepped the striker from the spot but it was weak and straight into the path of Cech who tipped it easily away to safety.

Arsenal then entered a period of play where they had plenty of possession, but little cutting edge up front.

Pierre-Emerick Aubameyang, a case in point when he failed to latch onto a perfectly placed ball by Henrikh Mkhitaryan on 33 minutes.

Hudson-Odoi raced clear four minutes before the break, but Cech’s experience told and he smothered the winger’s shot.

The north Londoners should have levelled seconds later after Willy Caballero failed to get to a cross, but Sead Kolasinac’s shot was goal-bound but blocked for a corner by Cesar Azpilicueta.