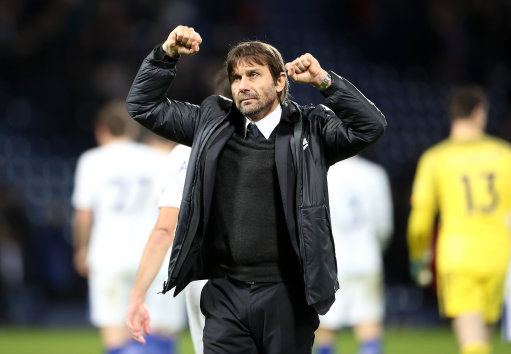 Antonio Conte is looking to Wednesday’s Champions League match against Qarabag as pivotal to any success this season.
The Italian manger has overcome what he calls early-season difficulties to have Chelsea third in the Premier League and close to qualification out of the group stages of the Champions League. They thrashed WBA 4-0 on Saturday to leapfrog  Spurs.
“We have to play the most important games of our season until now,” this week.
“If we are able to win against Qarabag, then we can go through to the next round of the Champions League. It will be very important because in this period from now until January, the programme is very busy. I think it will be very important to win the game versus Qarabag. It won’t be easy as they drew twice against Atletico Madrid in the last two games. Against Roma, they were struggling to win against them. It is very important to be focused to go to try to win the game. Then we play in just two days after against Liverpool. This is a very similar situation to when we faced Manchester City.

Chelsea were thrashed 3-0 in their last euro outing to Roma and Conte was less than complimentary about his team’s performance that night.
So how has he got the hunger back?
“I think the second half (in Rome) was negative,” he admitted. “For me, we didn’t deserve to finish the first half 2-0 down, but the second half was negative because we didn’t show the desire to change the result, to try to draw, to try to win. But I think in every season there are games [like that]. You have to understand if this is a right way or this is a wrong way that you are doing.
“I must be honest. These players and this team has always shown great desire, great will to fight in every game. Against Roma, together we didn’t show this. Me first. I always put myself before the players, to take responsibility.”
Chelsea went into beat Manchester United 1-0 day’s later and they will want to repeat that when they face Liverpool at Anfield on Saturday.

To do that they will need Eden Hazard and Alvaro Morata on top form.
They both pear to be at that stage now, and Conte is happy about that.
“In this season we faced a lot of problems from the start,” he said. “Now we’re trying to solve these problems, to recover the players, to find the right form for players like Hazard and also Morata – this is the first season that he’s playing with regularity.
Kante is recovering good form and you know very well the importance of these players for us. Also Drinkwater, now he’s starting to play. We had a lot of problems and also we’re trying to change something in the tactical aspect, to find different solutions. When you concede so many goals it means you have to find a new balance and solidity
That tactical change has resulted in the demotion of David Luiz and the installation of Andreas Christensen.
Conte said: “I have always answered that it was a tactical decision. Every game I have to try to make the best decision for the team, and if I’m taking this decision it means Christensen is deserving to play. In the past it happened the same at the start [of the season] with Eden. Before he was completely fit he was on the bench, and then [we went] slowly, slowly to find the right form. I think Christensen is playing very well but we have to play a lot of games, and we have to play every three days. “We need all the players and to have different solutions. Last season in this position I didn’t have this opportunity.”

Of Hazard’s increasing influence on results, Conte said: “To see Eden in this fitness is very important for me. Eden and Morata showed a great link, but also with the ball we have another player with great creativity in Cesc Fabregas. This season, I think we’re changing something to find a new balance, a new solidity, to have a good balance when we are attacking and when we are defending. I hope to continue to improve. This is the second game we finished with a clean sheet and we have to continue in this way.”
Conte is nothing if not positive about fellow managers – with the odd exception, and Under fire Tony Pulis, the WBA manger is no exception.
“I must be honest: I think Tony Pulis is a really good manager,” said Conte.
“He has great experience and it’s always very difficult to play against his team. This game became easy because we started very strong, with great concentration and desire to win. We showed from the start our will to win this game. But I repeat, last season we struggled a lot against them. Before this game I studied them a lot and I saw that in the previous games they lost a lot of points and deserved a [better] position in the table than [they are in] now.”