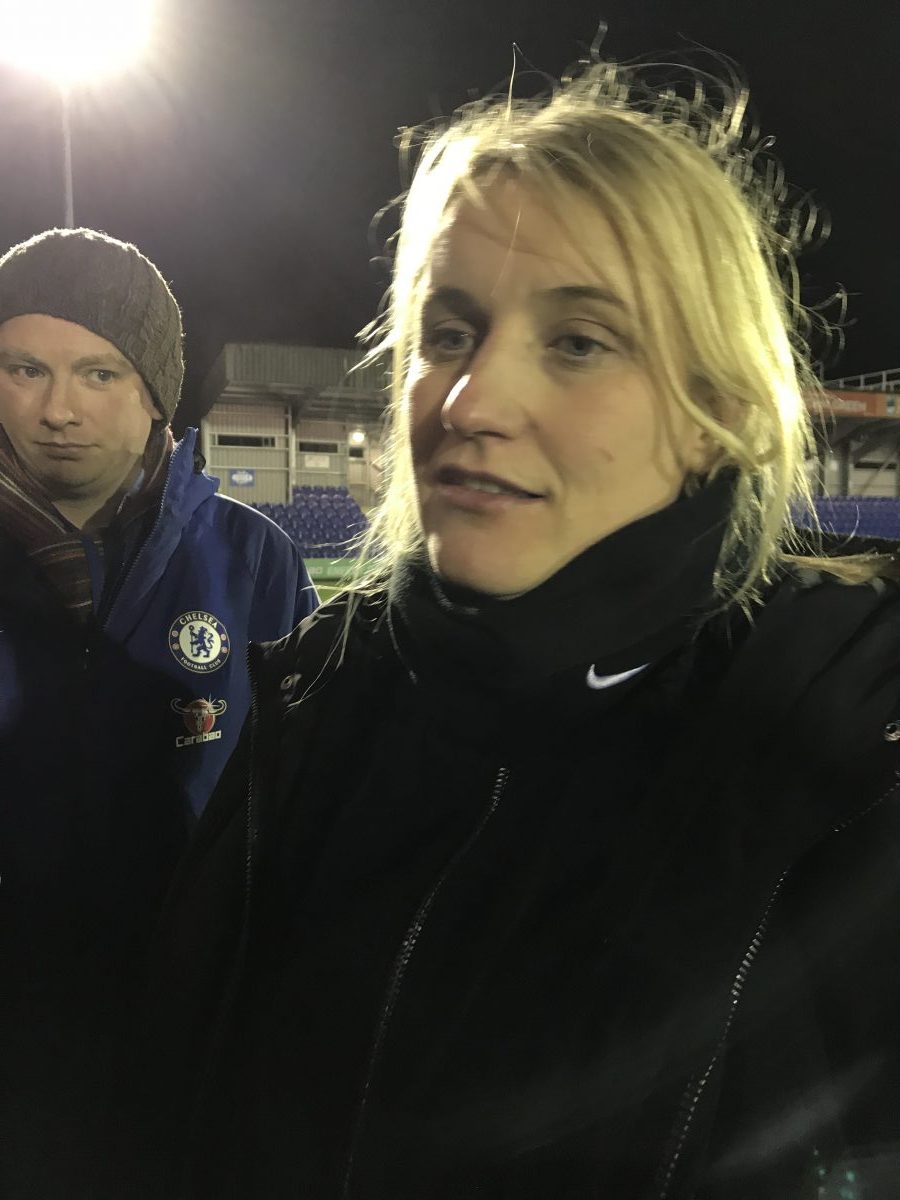 Emma Hayes went for the throats of the ruling body the FA following Chelsea’s sluggish performance against Reading in a 2-2 draw at Kingsmeadow Stadium this yesterday.
The Chelsea Ladies manager felt the FA should have helped them in their fixture scheduling, as in the past seven days they have played Liverpool in the FA Cup and Montpellier in the Champions League – they face them again in two days in the second leg of their quarter-final encounter.
She said: “I was always worried about these past two weeks. I think our football association should do more to help our Champions League sides.
“It was a tough game (against Reading). We had to play in tough conditions last Sunday (in the FA Cup away to Liverpool) then travel away to France in the quarter-final. We didn’t get back until late Thursday and then we are expected to play a top four team (Reading) and next week (against Arsenal).
“I have to make a decision, do I prioritise Champions League or WSL 1 league? I don’t think us or Manchester City should be put in that position.
“You could see how long it took for us to start – there were heavy legs out there – it’s understandable. It takes a while to get going again. And when you have a game every three days it’s a tall ask for the players – to put a lot of pressure and stress on them to always be at their best.
“But having said that my team showed great character in the second half after going 2-0 down. Most people would think we would be dead and buried – but in all fairness if we had better officiating, I think we would have won the game.”
Chelsea went 2-0 down before Joanna Andersson and Fran Kirby levelled.
Asked if the the real winners were Montpellier who, without a game this weekend, and who will be well rested and revelling in Chelsea’s laboured performance, Hayes was unequivocal.
“Yeah absolutely,” she said. “We have hamstrung the team for Wednesday. Because we will have picked up injuries. We will have massive fatigue in the group. And we have just handed the advantage to the opposition, and I’ve spoken about this before. But whoever is in the Champions League, we must do whatever we can to keep those teams in there.
“The solution? We should not have played on Sunday. We must make sure we rest and recover so that we are ready for Wednesday. If we play at the next weekend – fine, we can do that. There were plenty of opportunities for us to have got this game played earlier on in the season.
“The players are athletes but are human. We have to now play one of the top two teams in France, a top eight team in Europe and be at our best. You can’t do that. So you give up something somewhere.
“But what we do have is character in abundance. The crowd were tremendous in the second half, they willed the team on. And I’m proud of the performance given the circumstances.
“If I’m playing Reading under normal circumstances I’m playing my strongest side. But I can’t do that because some players didn’t recover from Wednesday. And If I want to play my strongest team on Wednesday, I can’t do that. Yes, there is a squad, but the manager should be in a position, to be supported in Europe.
Asked why the FA should care, Hayes made a convincing argument.
“I think that if we want England to progress, we need our players to be playing in the top competitions, it gives them more exposure, more experience. But more importantly, players are human, That’s the biggest gripe. it’s not about helping, it’s about picking up serious injuries if you don’t get enough recovery.
“It’s important I do go on record. For me it’s about protecting the players not anybody else. Reading haven’t had a game for four weeks. But we have played quite a lot in that time. we need to be mindful of that going forward, whatever teams qualify for the competition. We help them.”
As a consequence is Hayes worried about getting through to the Champions League semi-final. They lead Montpellier 2-0 from the first leg?
“I have concerns for Wednesday,” she said. “We are a team that has played three very tough games in a week. And we have to go again on Wednesday and again on Sunday. You can see we are a quality team, but you saw the second goal we conceded – that was just tired legs. Bodies not quite recovered enough to get to the ball. And that’s why I think we let ourselves down. That is not a true reflection of the team. It’s not a goal we would ever concede. But we will if you still have travel in your legs.”