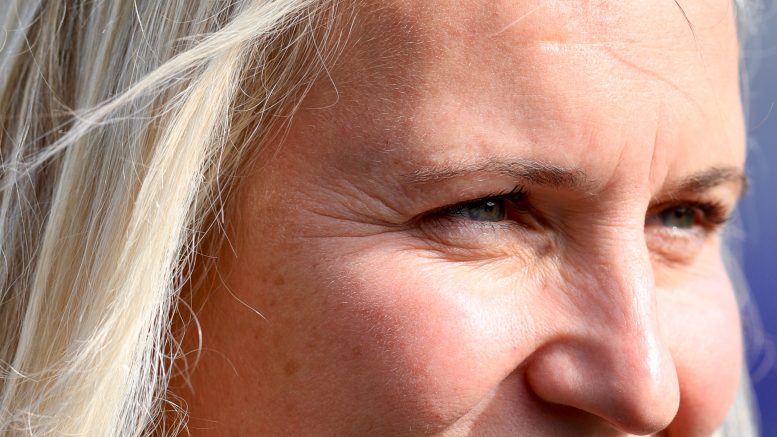 Emma Hayes believes that the three gilt-edged chances her players missed against manchster city this afternoon were the reasons why they and not the Blues will face Arsenal in the Continental Tyres cup final
“I’m more disappointed that we missed three open goals,” she said.
“In a game of so few chances, arguably we had the best three. You work so hard to get yourself in good positions.
“The first half we should have gone 1-0 up. They then go down the other end and score on the counter.
“And that’s what makes them so clinical, you have to credit them for that.
“The cup is what it is. But when I see two chances flash across the box and they are tap-ins for us. We missed them that’s going to be the difference between the two sides and that’s why they are heading to the final.”
Haye’s team were generally second-best all over the pitch despite having excellent chances.
“We were poor in possession, especially from the back,” she said.
“I thought we looked hesitant. We needed to improve. We have got players that can do dangerous things. But the one thing we did poorly today was our possession from the back and our hold-up play up top was not s good as it could be.
“When Erin Cuthbert came into the game. She offered the threat from the side that the two striker’s hadn’t done up to that point.
“If you look on the balance of play, regardless of possession and all those stats, we’ve had the best three chances. And not finished.”
Chelsea are next in action, at home against Everton on January 28.
Of the visitors, Hayes said: “There is now an international break. We will regroup. After that. There are a few games back to back including Man City coming back here on February 1st.
Everton will be tough – it was feisty in pre-season. They have struggled to score goals. But they are a good young side. They will make it difficult. They are full-time, and when you are full-time, the physical differences really make the games tougher