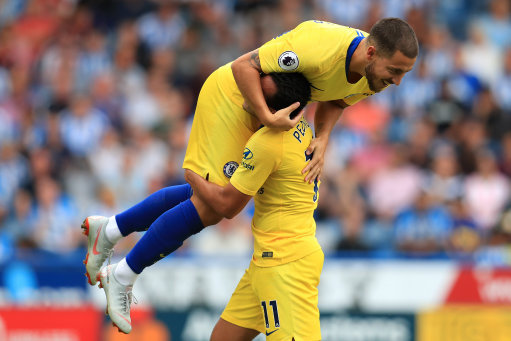 N’Golo Kante and Jorginho’s first half strikes, the later a penalty, and a cool piece of finishing by Pedro in the second ensured that Chelsea got the perfect start to the new Premier League season, beating a limited but hard-working Huddersfield Town 3-0 at the John Smith’s Stadium this afternoon.

Maurizio Sarri’s 4:3:3 took some time to get into full flow, and against a more talented side, the Blues face Arsenal next week at Stamford Bridge, they may find that they are under considerable greater pressure than they were today.

Despite the 3-0 margin, striker Alvaro Morata was again a disappointment and a decision will have to be made about who will be Sarri’s starting marksman this term

Olivier Giroud is still not 100 per cent fit following his later return from holiday after winning the World Cup with France  but will be in the next fortnight – this is in effect a final audition for Morata. Score or face the chop.

Others facing a crucial time before the loan window shuts at the end of August is Ross Barkley and Ruben Loftus-Cheek – the later replacing the former. Two other midfielders Cesc Fabregas and Danny Drinkwater were not even in the squad. Drinkwater was at least at the match – sitting in the stand with Emerson and Rob Green.

Morata had the first chance of the game on four minutes. But slid the ball wide of Ben Hamer’s goal after excellent set up play by Pedro.

He did not realise he was in fact inches offside, which perfectly summed up most of this calendar year in front of goal for the Spain striker.

Prolonged pressure by the Blues where more than 40 passes were involved ended inauspiciously with Marcos Alonso thumping the ball in to the Huddersfield penalty area, where they was no on e to received it, other than Hamer.

But whenever Chelsea lose the ball, the home side are on it and pushing to get forward.

A pinging effort from Steve Mounie on 26 minutes inched over new boy Kepa Arrizabalaga as Chelsea suffered at the back from the pressure heaped upon them.

Against the run of play the Londoners took the lead on 34 minutes. A simple left win cross by Willian was a met by N’Golo Kante, who to be fair, miss kicked the ball into the ground and the ball sidled past Hamer in to his right side-netting.

Huddersfield were desperately unluckily not to equalise four minutes later when, from a corner Mounie smashed a powerful unchallenged header against Kepa’ s right post. The ball zipped across the Chelsea goal but was cleared.

Right on 45 minutes, after a brilliant sequence of passing involving Pedro in particular, Alonso raced into the penalty area and was taken down as he was about to shoot.

Up stepped Brazilian Jorginho with a sensational spot kick which was a simple run up, a little skip just before he slotted home a slow, low ball into the left hand corner of Hamer’s net, with the keep rooted to the middle of the goal.

Sarri refrained from making any half-time changes. Huddersfield brought on Laurent Depoitre to add strength to their forward line.

The second half was similar to the first, lots of good Chelsea possession coupled with hard work by Huddersfield. However a Rudiger header and a hooked Alonso overhead kick, which clipped the crossbar asserted the visitors’ dominance.

An Alonso free-kick inched over the crossbar on 65 minutes.

It’s still auditioning time for a number of players, these two in particular from the midfield.

Eden Hazard came on for Willian with 15 minutes left on the clock.

With Huddersfield pressuring, on 80 minutes, the Blues went up the other end, and a strong Hazard run through the centre saw the Belgium maestro slip the ball to his right, to the in-running Pedro who cooly slotted the ball home past an advancing Hamer from just inside the penalty area.

That was Pedro’s last touch as he was immediately replaced by Victor Moses.

The Blues ran down the clock and can be delighted with the three points – job done.