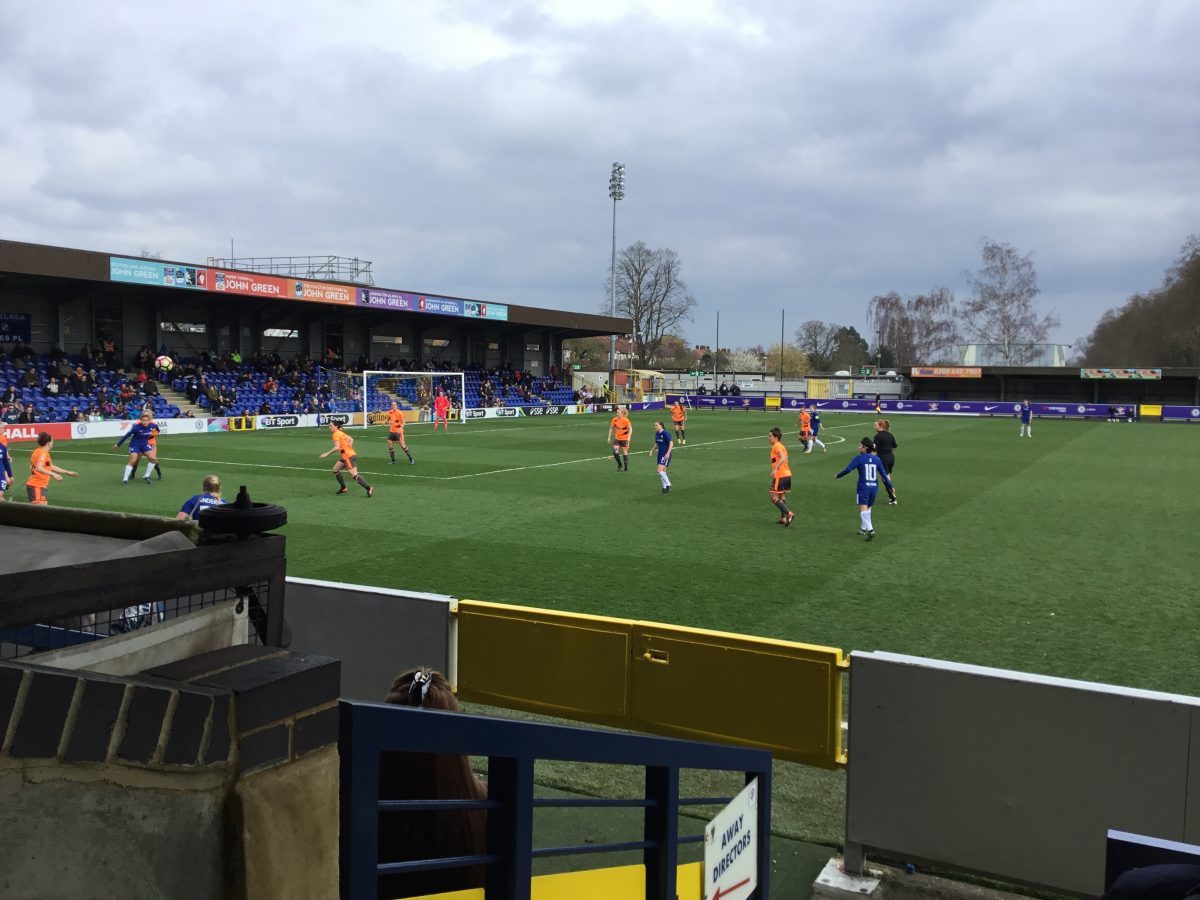 Fran Kirby secured Chelsea a point when really they were lucky to get one as the league leaders were held 2-2 by Reading at Kingsmeadow this afternoon after going 2-0 down.
The only real winners here are Manchester City who will delight in the Blues dropping league points and Montpelier, who the Blues face on Wednesday in the second leg of a Champions League quarter-final.
This was a Chelsea tired and vulnerable after the exertions of the past seven days where they beat Liverpool in the Women’s FA Cup and took an energy sapping 2-0 lead in Montpelier in midweek.
Reading took the lead through a Brooke Chaplen penalty before Fara Williams doubled then lead a minute after half-time.
But a goal by Jonna Andersson and a sweet strike by Kirby kept the Blues untreated home record intact.
Good early pressure by the home side, saw Eni Aluko looped the ball over Mary Warps crossbar from an acute angle.
Aluko had a great chance to score on seven minutes when excellent work on the left by Fran Kirby set up the ex-England forward, who, on the edge of the Reading penalty area should have taken a touch before shooting. Instead she tried a first-time side-footer which went hopelessly wide.
The visitors’ first effort on Carly Telford’s goal came on 15 minutes, but Lauren Bruton’s right-footed effort went well wide.
Magdalena Eriksson got a yellow card form a fierce challenge on Natasha heading – Katie Chapman also got a yellow from referee Helen Bruyne, presumably for dissent.
A Bruton piled-river zipped over Telford’s crossbar and Reading finally got a foothold in the game.
Cuthbert flattened Jade Moore in the Chelsea penalty area after she failed to take control of a Chapman header following a Fara Williams corner.
Up stepped Brooke Chaplin to slot the penalty home comfortable, sending Telford the wrong way.
Harding entered Byrne book for cynically holding back Maren Mjelde.
Kirby had a brilliant effort on half-time, taking advantage of a slip. Kirby fed Aluko who returned the pass. The in-running England forward took one touch but drove her fierce right-footer over Earps crossbar.
There were no changes in personnel at half-time by either side.
A terrible mistake a minute after they restart by Eriksson who slipped allowed Fara Willians to take aim and left fly from 25 yards and the bail zipped past Telford to double the lead for the visitors.
A dive by Chaplen on 50 minutes did not deceive Byrne and the Blues swept upfield quickly and the ball fell to Kirby. She raced to the byline cut the ball back and raced into the box and Jonna Andersson smashed the ball into the roof of the Reading net.
A swift break involving Cuthbert and Aluko saw Aluko strike on goal, but Earps was equal to the task.
Kirby forced Earps into a super save as the Blues went in search of the equaliser.
Reading however always looked dangerous when going forward.
Hannah Blundell replaced ineffectual Davison on 59 minutes.
This was quickly followed by Drew Spence, on for Aluko.
Bruton crashed a smart effort off Telford’s crossbar on 62 minutes as the Blues rode their luck.
Emma Hayes final substitution came on 71 when skipper Chapman was replaced by Maria Thorisdottir.
With 14 minutes left, Super Fran Kirby took advantage of an excellent through ball by Cuthbert to plant a sizzler of a right footer past Earps to level the scores.
With six minutes on the click Drew Spence brought a fantastic save from Earps who tipped her deft header over her crossbar for a corner.
Quite how Spence missed with a blistering volley from a deep Andersson cross is anybosies guess, but the striker inched past Earps goal.
Kirby tried an audacious chip over Earps with 90m minutes on the clock, but the goalkeeper managed to snaffle the ball.