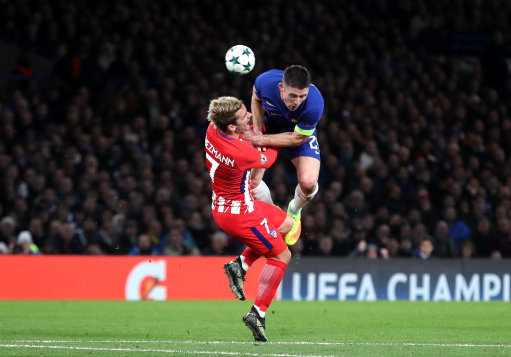 Chelsea failed to top Group C of the Champions League tonight as they could only draw 1-1 against Atletico Madrid at Stamford Bridge.
The Blues went behind early in the second half, and only an inspired run and shot by Eden Hazard, which was deflected into his own net by Stefan Savic, spared the west Londoners blushes.
Roma are at the helm of the group with the Blues in second and they could face the likes of Barcelona or Paris St German in the next phase in February.
With Atletico needing to win to have any chance of progressing, they started off the brighter with Antoine Griezmann saw a first-time shot, on target but deflected or a corner.
Chelsea’s first effort was a smart turn and shot by Alvaro Morata on 17 minutes, but the striker’s edge-of-the-penalty area shot inched wide of Jan Oblak’s left upright.Oblak was on then right spot again, on 23 minutes thwarting Morata once more after N’Golo Kante set him up. Morata got his shot away, but Oblak was quick to get down to the ground and smother the goal-bound effort.
Davide Zappacosta, in the side for rested Marcos Alonso, almost opened the scoring but his daisy-cutter was well tipped round the post by put upon Oblak.
Gary Cahill and Griezmann clattered into each other on the half-time whistle. It was more a case of clumsiness from Cahill that anything cynical.
chelsea started the second half with a flea in the ear from Conte as first Christensen, hazard and Morata forced saves from Oblak. Hazard’s in p[articular was a trademark mazy run and shot, on target, but deflected away from goal for a corner. The other two, excellent headers but lacking power, giving the goalkeeper time to adjust and grab.
But it was Atletico who almost scored, when ex-Blue Felipe Luis crashed a left-footer past Courtois, but it hit his left post, the follow-up by Kobe’s head was saved by the Belgium stopper.
On 56 minutes Diego Torres, the hero of Stamford Bridge flicked on a corner at at the far post, was unmarked Saul’s Nguez, who cooly headed home.
Madrid boss Diego Simeone replaced Torres seconds later with Yannick Carrasco.
That goal prompted Antonio Conte into a change of his own Pedro coming on for ineffectual Tiemoure Bakayoko.
Christensen missed a close-range sitter. Unmarked, he dived for a byline cross but somehow managed to head wide of an empty goal. Pedro saw his clipped shot halted on the Atletico goal line by a combination of Oblak and Jose Gimenez.
Willian was next to enter the fray as Conte attempted to add extra pace to the side, Zappacosta made way.
The equaliser came within a minute. Hazard’s low drive was deflected by Stefan Savic into his own goal
Morata then had a great chance to give Chelsea the lead. he raced clear but shot straight at the goalkeeper.
Morata was replaced by Michy Batshuayi with 10 minutes left on the clock.
Willian then whacked the ball overt the cross bar after excellent set up play by Hazard, cut the Spanish side’s defence to shreds.
Fabregas set up Batshuayi, but his angled cute shot inched wide of Oblak’s goal.