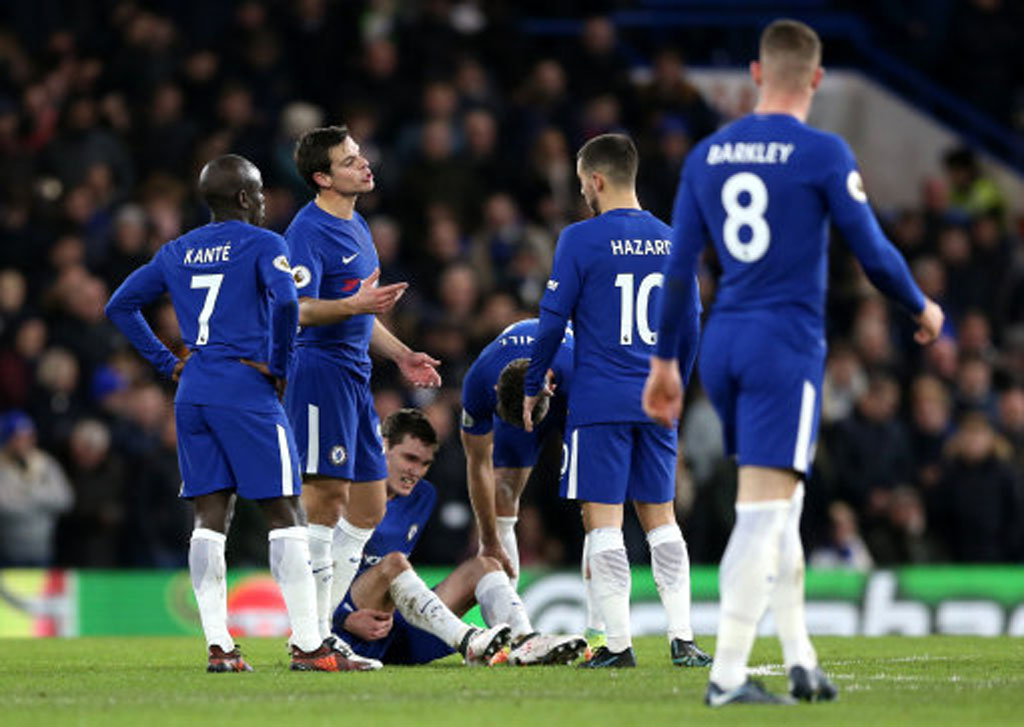 Chelsea are now staring down at a resurgent Tottenham, who are just two points away from the Blues in fifth place – Champions League qualification from a top four finish is looking less likely as every match goes by.

This was their first home defeat in the league since the 1-0 defeat by City at the end of September, but draws not wins has seen the Blues drift and now they are facing the real prospect of a free fall in form.

In fact the Blues could be out of the top four places when they next enter the field- away to Watford on Monday night. Spurs do have a tricky trip to Anfield to contend with on Sunday.

This was undoubtedly the worst performance under Antonio Conte’s tutelage. And the crowd streamed out of Stamford Bridge long before the end.

Chelsea opted for the false nine following Michy Batshuayi loan move to Dortmund and with Alvaro Morata injured and new man Olivier Girond watching from the dug out, the Blues relied on the talents of Eden Hazard to create something upfront.

Ross Barkley made his first start in a blue shirt since his £15million move south from Everton and looked keen.

Bournemouth were unlucky on a couple of occasions as the Chelsea defence went asleep and the defensive midfielders caught napping.

But poor finishing was their undoing.

The Blues were dealt a blow with the apparent hamstring injury sustained by centre-back Antonio Christensen on 27 minutes – Antonio Rudiger replaced the Dane.

There was no change of personnel at half-time.

Alonso was unlucky with a free-kick on 49 minutes and a minute later the visitors had snatched the lead. Chelsea’s porous defence was exposed again after Tiemoure Bakayoko lost the ball to Jordan Ibe. The ex-Liverpool man slid the ball past Gary Cahill, Callum Wilson connected with the ball on the edge of the Chelsea penalty area and drove the ball home low, past Courtois.

Hazard had a left-footer, on target, a minute later but Begovic easily smothered it.

Worse was to follow on 63 minutes as Cahill was done for pace again, and this time Junior Stanislas cut the Chelsea defence apart, before tucking the ball home under Courtois’s body.

That had no effect as the visitors notched up number three on 67 minutes. Ex-Blue Nathan Ake the first to react in the six-yard box to side-foot the ball past a prone Courtois.

Alonso tried a long-range effort which was not far away as the Blues went on the Herculean task of scoring at least three goals.

A shout for a hand ball off Ake was dismissed by referee Lee Probert as the Blues grew increasingly desperate.

The Blues were terrible, the fans subdued. Now it’s all about Watford away on Monday night.