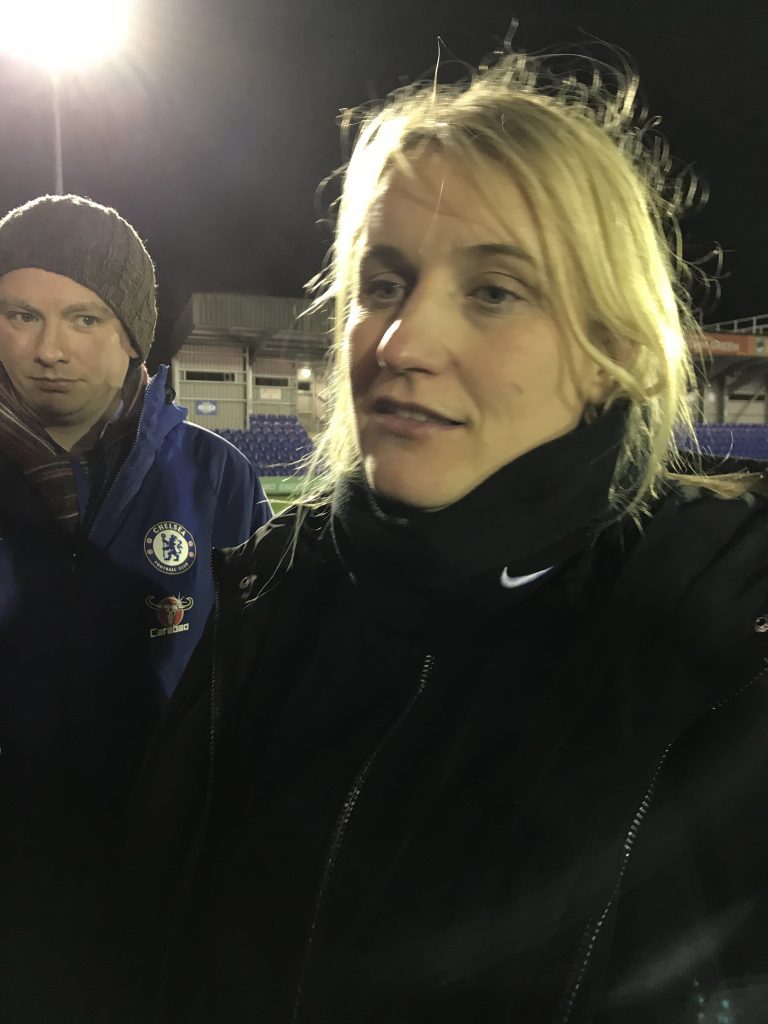 Chelsea boss Emma Hayes has revealed she won’t be leading her side out onto the Wembley turf when they take on Arsenal in the Women’s FA Cup final on May 5  and she doesn’t mind one bit.

Hayes is expecting twins, and having watched her striker Fran Kirby strike twice to unseat FA Cup holders Manchester City 2-0 at Kingsmeadow, on Sunday, Hayes confessed that the exertions of the day will force her to take a back seat and allow her assistant Paul Green to do the honours.

She said: “I’m hurting, physically feeling it. It hurts.

“There is about seven weeks to go. Paul Green will be leading the team out at Wembley.

“I will be in the background, and it will be a fine day for him. He is the general manager, my trusted lieutenant.” Asked if she is upset that it’s every manager’s dream to lead a cup final side out at Wembley, and she now won’t.

Hayes, as pragmatic as ever said: “I don’t mind. I’m a woman, I don’t have a big ego. it’s about the team. And at the end of the day, I’m going to waddle out there.

“It will be uncomfortable for me. But it will be best for my babies’ health that I sit in the chair, chill out and let somebody else do that, have that honour.”

Of the game against City, Hayes admitted also that it was a difficult build-up. Several key players such as Millie Bright, Hannah Blundell and Kirby had been nursing injuries.

She said: “We’ve had a challenging week, some of the players have suffered some personal stuff off the pitch. We have injuries, sickness. It’s been a difficult week also with players coming back from international duty.

“We’ve made no excuses. It shows that when you work hard, with little reward sometimes in training, that you have to prepare yourself, for these big moments. So for the subs coming into the game, or others getting a start, this is a win for them as it is for the injured players, and the missing players.”

Hayes could only name four substitutes as Ramona Bachmann pulled out of the game just before kick off due to sickness. But Hayes remained confident: “I believe in the squad,” she said.

“We are down to our bare bones, but it was so gutsy from the team. I felt yes, the first goal was important, it was a wonderful finish from Fran Kirby, and the timing of the second was perfect, but our defensive play was excellent.

“I don’t think Hedvig had too much to do.” In regard to missing and ill players, she said: “Well, you have to do what’s right. If players get sick before the game, you have to isolate them. You can’t put them around players as we have another game tomorrow (away to Everton Ladies), but Ramona is gutted she missed out. But Erin Cuthbert came in and you can hear the crowd chant her name – she’s 19. She is unlucky not to be getting more starts.

“But it’s important she gets the right habits so she is built to last.”

Hayes understands the importance of Kirby to any success Chelsea achieve. “As for Fran Kirby, that’s what she does best,” said Hayes of her two goals.

“She’s great in the FA Cup. She has got a lot of big semi-final goals for this team.” Kirby pulled out of England’s World Cup qualifier last week to Bosnia with a hamstring injury.

Hayes said: “I always leave it to the player – I never push. Of course I want her to play. She’s a top player. She has been in rehab all week, in the treatment room. And she did what she needed to do to get through the game.

“We have had to nurture her through the week, I didn’t think she was going to play. But that proves how tough she is.

“While I’m incredibly pleased, you can see why, for both teams, I’ve complained about the gruelling schedule. Because you can see the injuries we are getting.  We are at Wembley, we have another game on Wednesday and then an even bigger games on Sunday against Wolfsburg in the Champions League semi-final. You can probably see now why it’s a tall order for an English team to go all the way in that tournament.”

Modest Kirby said of her two strikes: “It was lucky for me my team managed to put the ball in a position where I can go one on one with the goalkeeper. Hopefully I can continue to keep putting the ball in the back of the net.

“The most important thing is that we win, it’s doesn’t matter who scores. We will recover now. All our focus now is on Everton on Wednesday. And put Wembley at the back of our minds. It’s real crunch time now in the league and Champions League. When Wembley comes around and we face Arsenal, I hope that we can get a bit of revenge after losing the final in 2016 to them.”