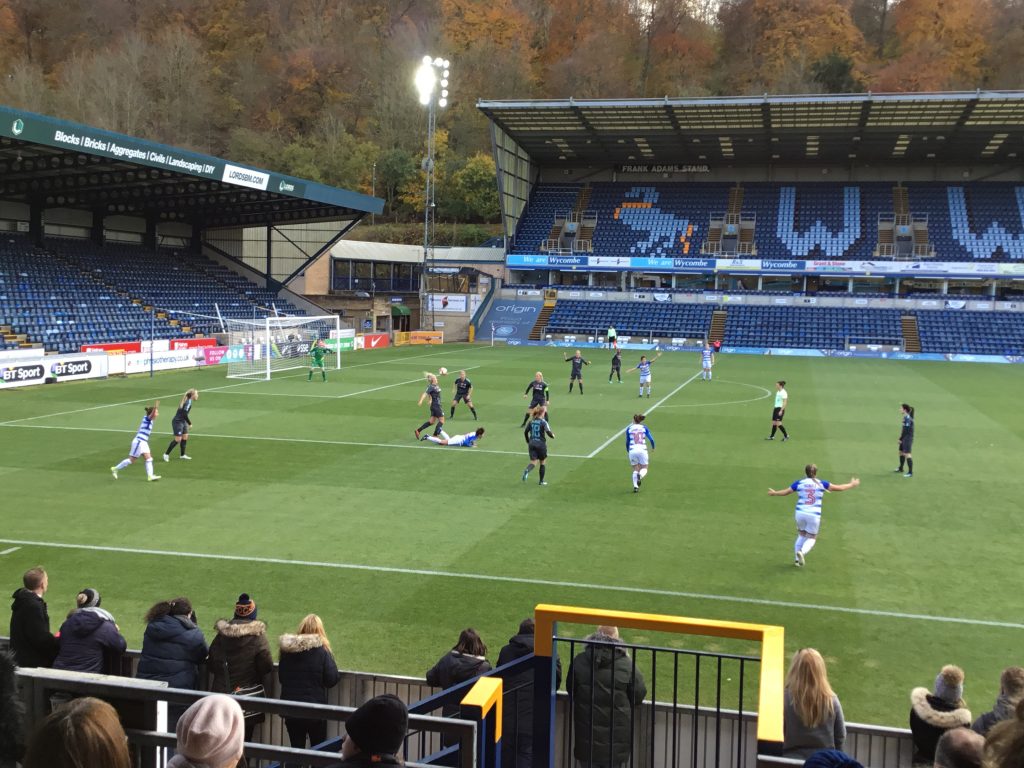 Chelsea let slip their unbeaten league record when an injury time own goal from Magdalena Eriksson saw the Blues drop two points as they drew 2-2 against Reading at Adams Park this afternoon.
Perhaps they had the Champions League second leg in Sweden on their minds on Wednesday against Rosenberg, but this was a well below performance from the Blues who overcame a first half deficit to lead 2-1 through goals from Karen Carney and a smart strike from Eni Aluko. Drew Spence forced a fine save from Reading’s goalkeeper Mary Earp after five minutes.  The Chelsea striker drove a low goal-bound shot from just inside the byline, but Earps, did well to get down low and tip the ball away to safety.
Earps was quick to thwart Fran Kirby three minutes later when the England striker raced clear. Earps blocked Kirby’s goal-bound effort.

Next up was Gemma Davison who zipped a blockbuster of a right-footer inches over Reading’s crossbar as the Blues went for the jugular early.
A snatched effort by Reading’s Fara Williams on 11 minutes was the home’s side’s first attempt on goal – the ball went well wide.
However, Reading gradually took control of the game in terms of possession , and it was no surprise that the Blues conceded their first goal in the league this season 10 minutes from half-time.

Remi Allen stroked home from close range after some terrible defending by Chelsea – they failed to clear the ball out of their penalty area on three occasions.
Manager Emma Hayes decided to alter the team at half-time, hauling off right back Maria Thorisdottir and replacing her with winger Crystal Dunn.
Gemma Davison was moved to the right-back position.
However the restart saw Chelsea as ponderous on the ball and lacklustre as they were in the first.
But despite that the Blues dug deep and got their reward from the trusty right boot of Karen Carney on 55 minutes, as her edge of the penalty area free-kick was too low and wide for Earps to get to and the ball nestled in the far corner of her net.
Fara Williams could  count herself unlucky not to have put Reading back in the lead three minutes later, but her free-kick smashed off Henvig Lindahl right upright and away from goal.
Eni Aluko entered the fray on 66 minutes as Hayes went for pace on the wings to open up Reading – Drew Spence departed.
The substitution reaped dividends almost immediately as the Blues took the lead – as Davison cut Reading open on the right, she fed the ball to Kirby, who knocked it sidewards onto the in-running Aluko, who dispatched the ball home with a smart right-footer. However the Blues still allowed the home side too much space and several times Lindahl was the saviour to add to some shocking finishing by Reading
But an own goal from Erickson, a looping header – was their undoing and to be honest they could have conceded a third late on.