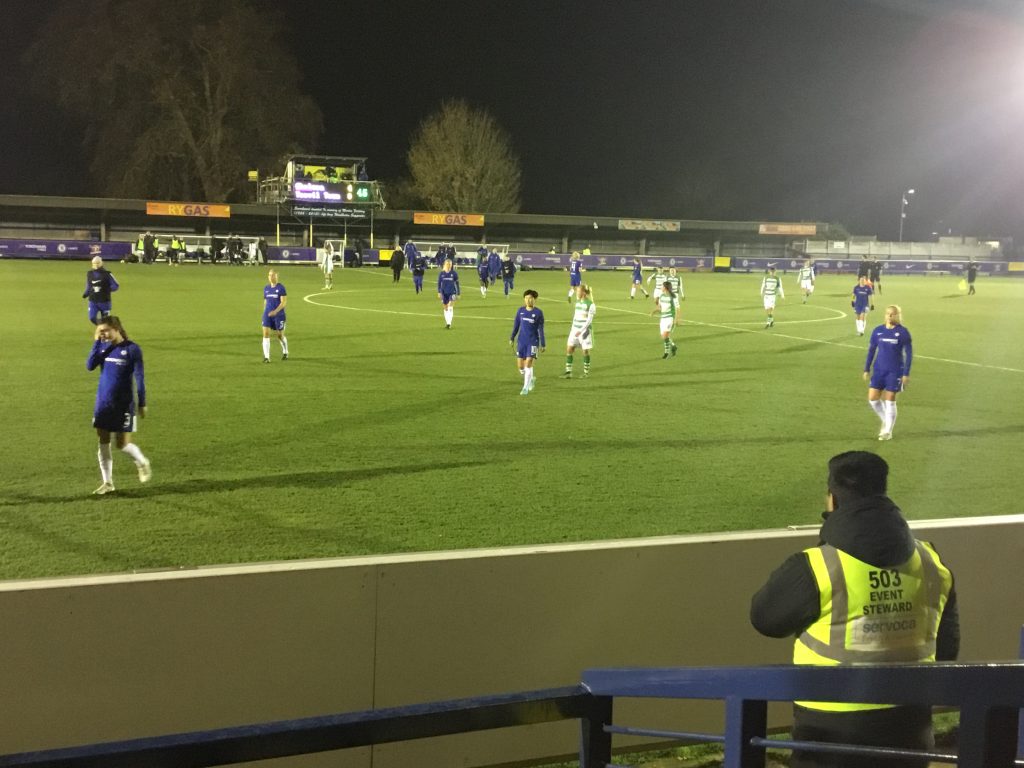 Chelsea Ladies thrashed their West Country opponents Yeovil Town tonight 8-0 in the Continental Tyres Cup at Kingsmeadow stadium.
The only drawback on an otherwise faultless performance was the injury to winger Eni Aluko in the first half.
She needed 11 minutes of pitch-side medical treatment before being stretchered off and taken to hospital.
A brace by Erin Cuthbert and Drew Spence and goals from Crystal Dunn, a penalty from sub Fran Kirby, and a Gemma Davison near-post effort and an own goal sealed the fate of the visitors who were hammered 6-0 by the Blues earlier in the season.
Davison had even missed a second half spot kick.

Chelsea’s dominance of the game started from the first whistle and the opening goal came from the boot of American Crystal Dunn after excellent right wing play by Eni Aluko on six minutes.
Erin Cuthbert had a great chance to double the score on 12 minutes, but her header was tipped over the bar by Yeovil Town goalkeeper Megan Walsh.
An own goal followed on 19 minutes as the visitors were undone, once again on the right. The unfortunate was Nicola Cousins.
Aluko and Cousins clashed on the byline and the Chelsea winger crashed into the advertising board attempting to hook the ball back in play.
Medical staff raced onto the pitch to treat the winger and after 11 minutes was carried off the pitch to be replaced by Fran Kirby.
Yeovil’s first effort, on target was from the right boot of Nadia Lawrence, who attempted to lower the ball over Carly Telford from 25 yards. It failed.
Number three came in the third minute of the 13 added by referee Paul Howard. Erin Cuthbert’s left footed drive from eight yards out, sailed past the hapless Walsh.
On the 12th minute of added time goal number four, Kirby back-heel and the Drew Spence tucked it home from close range.
Aluko was taken to hospital for a check-up but was reported ti be sitting up and talking and saying that she wasn’t knocked out.
The second half started as much s the fist with the home side in the ascendency.
Kirby hit the upright from sub Claire Rafferty’s corner.
But the fifth was soon up, Cuthbert slotting home cooly from just inside the penalty area on 57 minutes.
Four minutes later and Davison was hauled down in the penalty area.
Up stepped the winger but she flashed the ball wide of goal.
Davison opted not to take the second spot kick after So-Yun Ji was fouled in the box. Fran Kirby instead took up the challenge and smashed the ball home it make it 6-0 on 71 minutes.
The final two goals came from davison and Spence in the final minute.
Next up is the vision of Spurs in the cup on Wednesday night.
Chelsea: Telford, Blundell, Bright, Flaherty, Davison, Aluko, Ji, Chapman, Dunn, Cuthbert, Spence
Subs: Spencer, Thorisdottir, Rafferty, Kirby, Kriksson, Mjelde, Bachmann