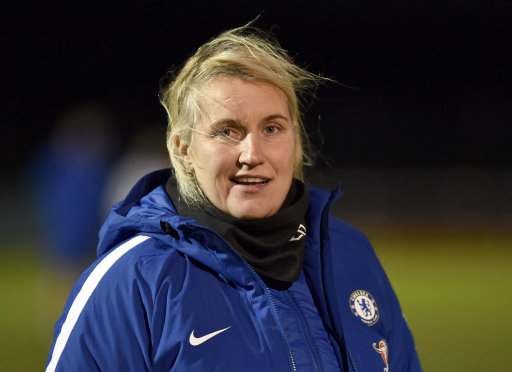 Chelsea Ladies face Spurs at home on Wednesday in their final Continental Tyres Cup Group match, knowing that they have already qualified for the quarter-finals.

Thrashing Yeovil Town 8-0 on Saturday, the penultimate match in the group, simply emphasised the gulf in class between the two sides.
Chelsea boss Emma Hayes even had the luxury of resting star international names, and she is likely to employ the same tactics against the north Londoners.
Coming up on the horizon is a top of the WSL1 clash match against Manchester City on Sunday.
But first there is a little matter of Spurs. but the match is also a celebration for long-serving Clare Rafferty.
Hayes said: “On Wednesday night we play Spurs, but more importantly it’s a celebration of Claire Rafferty’s long-service at Chelsea. That’s the big message.“She has been at the club 10 years, that rarely happens now. It’s a celebration of her 10 years at this football club. She has seen it come the doldrums to become one of the top teams, not in the country, but in Europe, I’m very proud we are able to celebrate that in a big game.“We are hoping for a big crowd. But also we are playing Tottenham who are an up and coming side. I’m sure they we bring their own fans and it will be a big night for us.”

Hayes is confident that her side will continue their undefeated run at their new home at Kingsmeadow Stadium.
She said: “We tend to focus on the performance rather than the goals,” when asked about her approach to the Spurs match.

“I think they are a good side, they have goal scorers in their team and are difficult to break down. But we have all the quality to deliver the same type of performance we gave against Yeovil.”
Of the side she is likely to put out, it won’t be too different to that on Saturday.
She said: “We talk a lot about the squad. I had 10 days at home with the players who did not go away on international camp. They have been absolutely tremendous.
“I felt it was fitting their selection for Yeovil was justified, for the work that they have put in. And for the internationals who have been away, they have the right opportunity to recover.
“So it just showed the depth of quality in our squad.
“It’s not just in the range of goal scorers. But we are fluid, we have players who can play in a number of positions. They are so tactically adaptable and we work hard on that. So I’m very pleased.”
The match,at the Cherry Red Record Stadium, Kingston Road kicks off at 7pm.