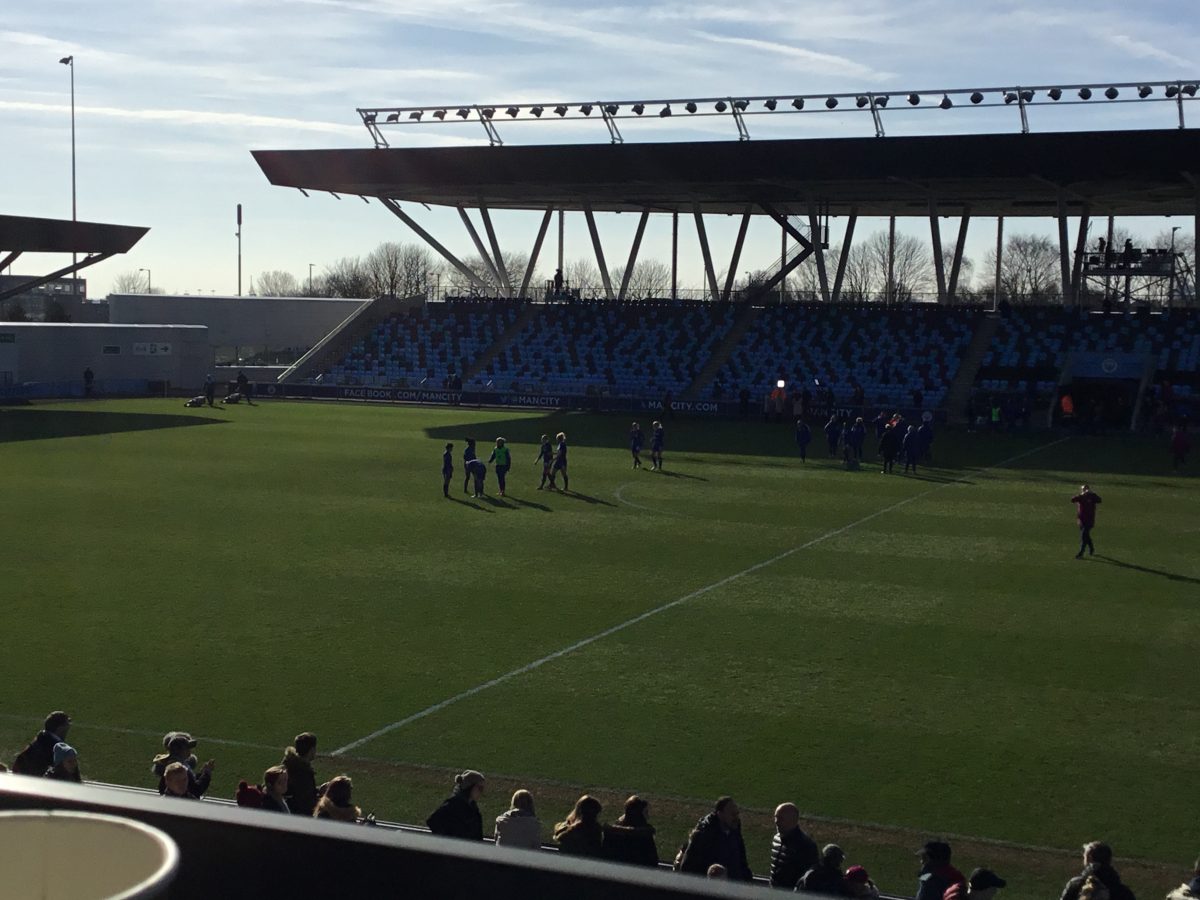 Chelsea blew the chance to open up a four-point gap at the top of WSL1 by letting slip a two-goal lead away to Manchester City Women to draw 2-2 at the Academy Stadium this afternoon.
Chelsea retain top spot but only by one point.
Goals from Millie Bright and Ji Son-Yun proved a near perfect first half performance.
However poor finishing from Fran Kirby, Crystal Dunn and Ramona Bachmann in particular failed to cement that advantage and they were made to pay the consequences.
A quick goal early in the second half by City gave them belief, and with four minutes left substitute Georgia Stanway rammed home 20-yarder to grab a share of the spoils.
Chelsea made a lively start with Crystal Dunn and Fran Kirby getting behind the City defence within the first two minutes
Their good start was rewarded with a blinding strike by centre-back Millie Bright seven minutes in, who staying up for a corner and thrashed a venomous left footer high and wide into the back of Ellie Roebuck’s net.
Kirby who pulls have made its number two on 20 minutes when she got through the City defence again. This time she took on on too many players and her goal-bound shot was blocked.
Goal number two cameo in 24 min utes, and again composed one=touch football, put City to they sword and Ji So-Yun was on hand to tuck the ball home comfortably with a sweeping left foot effort.
Ellie Roebuck was forced into a smart save from Kirby as the Blues looked as if they could score every time they entered the City half.
Chelsea goalkeeper hedging Lindahl was perfectly positioned at her near post to thwart Nikita Parris shot on 26n minutes.
Kirby missed a hat-tricks of chances, the third, three minutes before the break. Her curling left footer from just outside the City penalty area inched wide of goal.
There was no change in personnel from Emma Hayes’s side while Nick Cushing replaced Julia Spetsmark with Claire Emslie.
The first chance of the second half fell to the visitors – again Roebuck did well to parry away Bachmann’s powerful shot.
City then when straight up the other end and, on 48 minutes, Chelsea were caught napping and Parris scored with a powerful header at the far post to bring City back into the game.
Drew Spence was replaced by Erin Cuthbert on 56 minutes.
A speculative Bachmann long-ranger force Roebuck Minto conceding a corner on 64 minutes .
City’s second substitution saw Georgia Stanway replace Izzy Christensen on 66 minutes.
Crystal Dunn blazed over the crossbar with 18 minutes on the clock.
Quite how Parris did not equalise on 78 minutes is anybodies, guess – as with the goal at her mercy on the right, she screwed the ball wide of the far post.
Ji was yellow carded a minute later.
City’s final substitution saw Nadia Nadim replaced by Jane Ross.
Gemma Davison came on fro out of sorts Kirby with six minutes left.
Cuthbert forced a brilliant save from Roebuck and again Dunn missed the follow-up as the Blues went in search of the viola to kill off any lingering City hopes.
However that’s exactly what happened a minute late as Stanway, known for her shooting, produced a pearler of a shot to equalise.
Ping ball football in the City penalty area saw City somehow thwart Dunn and Cuthbert in quick succession.
Hayes final throw of the dice to restore the lead saw Eni Aluko replace Bachmann.