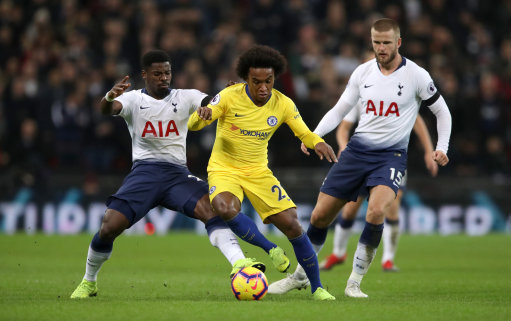 Chelsea were humiliated as Spurs went on the rampage, thrashing their west London rivals 3-1 at Wembley this evening and ending the Blues’ unbeaten start to the league season.

Goals from Dele Alli, Harry Kane and Son Heung-Min destroyed the Blues with substitute Olivier Giroud getting a late consolation.

This was coming for the Blues, a seemingly porous defence with a strike force not know for it’s goal-scoring exploits is a recipe for disaster – and it happened in the backyard of one of their fiercest rivals.

Spurs leapfrog Chelsea into third place in the Premier League with 30 points while the Blues, in fourth on 28. If Arsenal beat Bournemouth tomorrow, The Gunners will be within smelling distance and one-point of Chelsea.

The transfer window in January may be too far away for any replacements to make the difference and install fresh impetus. The Blues could be hanging onto Champions League qualification position by their finger-tips by then.

Spurs, by no means produced a world-beating performance. They simply did their homework. They bullied the midfield, nullifying Jorginho while Mateo Kovacic, Kante and Willian were overrun and bypassed on numerous occasions.

This was a victory designed in the training ground by Mauricio Pochettino and his managerial team. ‘Sarriball’ was nowhere to be seen.

Spurs started the brighter – forcing the Blues back and Harry Kane had the first effort on goal, on four minutes – his header from close range easily snaffled by Cesar Arrizabalaga. A clipped effort by Alvaro Morata from Willian’s right wing cross clipped over Hugo Loris’s crossbar a minute later.

But within three minutes  the home side took the lead – a simple Christen Eriksen header on the right, was met by the head of Dele Alli, who out-jumped his marker and glanced the ball, goal-wards. Kepa allowed the ball to slip through his fingers and into the back of the net.

Hung-Min Son should have doubled the score a minute later but half-volleyed the ball over the Chelsea crossbar.

Kepa kept Chelsea in the match by thwarting Son on 13 minutes after Marcos Alonso was disposed in midfield.

Hazard was bundled over by Juan Foyth and should have had a penalty, But  referee Martin Atkinson saw nothing wrong.

Spurs doubled their lead on 16 minutes when a speculative long-range effort by Harry Kane,was let go by by David Luiz and Kepa ended up rooted to his spot as they ball zipped past him and into the net.

Antonio Rudiger was given a yellow card on 19 minutes for hauling down Kane on then edge of his penalty area.

Morata’s second offside off the game did see Lloris brilliantly block his snap, close-range shot s the Blues made a semblance of an effort got get back into the game on 26 minutes.

Spurs should have had number three on 29 minutes but Kepa parried a Toby Alderweireld shot and a back-heeled Foyth effort was inches wide of the Chelsea goal.

Quite how hazard did not get a penalty on 45 minutes is anyone’s guess as he was taken down by Serge Aurier on the byline. Atkinson bizarrely just played on.

Kepa foiled Son on the stroke of half-time, parrying away the South Korean’s volley. Hazard was yellow-carded for a foul on Davies.

A neat free-kicky by the visitors almost reaped dividends five minutes after the great but matey Kovacic’s volley ended up in row Z rather than the back of the net.

With Spurs first attack, they scored and out was a beauty by Son.

Picking the ball up from the hallway line, Son raced past flagging Jorginho, ghosted past Luiz who refused to even attempt a challenge, he took one touch before thrashing the ball home past Arrizabalaga.

Maurizio Sarri then decided to make a double substitution – Kovacic off for Ross Barkley and Pedro on for Morata.

Kane missed a sitter on 68 minutes as a offside-waving Luiz allowed Spurs to counter-attack with ease. The England striker’s hack over the crossbar from eight yards out, embarrassing as it was but not as much as the Chelsea performance.

Jorginho was then given a yellow card for fouling Alli.

Sarri’s last throw of the die saw Olivier Giroud on for Willian on 76 minutes.

Giroud smashed home a consolation goal, five minutes from time after a regulation right wing cross by Cesar Azpilicueta was met by the France striker who hammered a powerful header past Lloris.