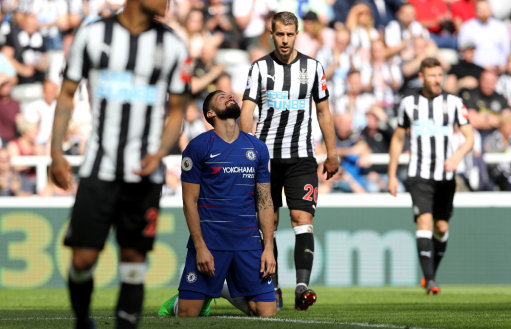 Chelsea were terrible. With one week to go before the FA Cup Final, the Blues were humbled 3-0 by Newcastle United at St James’ Park this afternoon as their league season ended with another humbling defeat.

Antonio Conte made eight changes from the midweek draw at home to Huddersfield – he could have made more, it simply would not have mattered. Only N’Golo Kante, Cesar Azpilicueta and skipper gary Cahill survived from that 1-1 draw.

For a team desperate to go into the Wembley final against Manchester Untied with some winning momentum, their performance suggested that the players were thinking more of a short holiday before the World Cup rather than preparing for England’s showpiece occasion.

There was not an attempt on goal in the first half by the west Londoners.

Only Thibaut Courtois came out the the disaster with some professional credibility – saving the Blues from a rout.

The early exchanges were all won by the home side without them creating a goal-scoring opportunity. Chelsea with six changes from the midweek draw with Huddersfield looked content to sit back and soak up the pressure.

That said, on nine minutes, a wonderful passage of play by Newcastle saw Jonjo Shelvey let fly from 25-yards with a blaster that Thibaut Courtois did well to parry away.

The Toon almost scored on 20 minuted when N’Golo Kante threw a leg at right Winn cross. The ball zipped off his shin, towards his own goal. Thankfully Courtois’s reactions were first class and he managed to get a hand to the goal-bound.

The goal eventually came three minutes later from a simple nod in by Dwight Gayle after Courtois parried the ball straight into the striker’s path.

Jacob Murphy had beaten the Chelsea offside trap and clipped the ball over Courtois, but his valiant attempt to  smack the ball out of the goal was in vain and the striker took full advantage.

Shelvey should have doubled the score a minute later, but his flashing left-footer inched wide of Courtois’s right post.

Courtois foiled Gayle when he got down low to tip away a certain looking daisy-cutter as the home side looked to capitalise on their total dominance.

But Gayle lasted three minutes before being replaced by Joselu.

Chelsea’s first effort on goal came on 53 minutes and it was a wonderful piece of magical skill by Olivier Giroud.

The striker met the right wing cross by Ross Barkley by back-heeling a volley while performing a 360 degree spin. The ball arched towards goal but Martin Dubravka  robotically tipped the ball over his crossbar for a corner.

Despite some good play by the Blues, normal service was resumed on 59 minutes. A woeful blind hack away by Tiemoue Bakayoko in his own area, only went 10 yards to Shelvey, who drove a low right-footer back into the Chelsea area. Ayoze Perez took a deft touch and tapped the ball on, past Courtois to double Newcastle’s lead.

Barkley was desperately un lucky not to score for Chelsea two. I utes later. A pulsating long trademark run saw the ball given back to him by hazard., But his  left-footer from six-yards out was kicked away by Dubravka.

Goal number three came on 64 minutes when as long free kick by Shelvey found Lejune at the far post who cut the ball back across goal and Perez was on the spot to slot home hits second.

Conte brought on Willian and Alvaro Morata for Barkley and Giroud.

Pedro came on for the last nine minutes for Hazard.