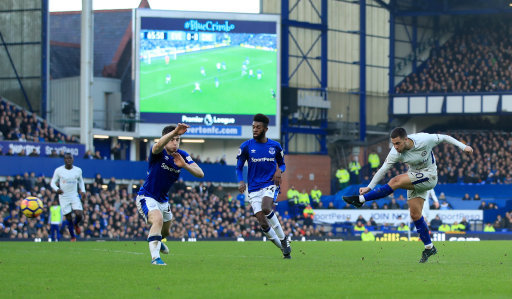 The Chelsea faithful had to endure a nail-biting 0-0 draw at Everton in the early afternoon kick-off.
A lack of clinical finishing and excellent goalkeeping thwarted the Londoners as Everton gained another point to ease their former relegation fears
Lots of possession means absolutely nothing if there is no one to put the ball in the back of the net when the opportunity arises.
Chelsea had countless chances at Goodison Park, but failed lamentably to take even one.
A glancing header by Everton centre-back Ashley Williams was the closest the champions had to netting a winner, but that zipped off Jordan Pickford’s crossbar and away to disaster.
The England goalkeeper was the man of the match, foiling Willian and Pedro on several occasions, but the clinical element of Chelsea’s game eluded them noir for the first time this’d season.
Chelsea remain third in the Premier League but could and should have got level with Manchester United on 38 points.
Neither side were set up for attacking as a priority, both relating on who could be the most incisive on the counter-attack.
After 10 minutes a swift Chelsea break break saw Phil Jagielka kicked the ball off the time twice as Tiemoure Bakayoko and Willian had scuffed efforts goal-bound following Marcos Alonso’s volley in to the Everton six-yard box.
A Willian free-kick on the corner edge of Everton’s penalty area, after N’Golo Kante was hacked down sailed high and wide of Jordan Pickford’s goal. So high, it was lucky it did not hit Santa’s Sleigh.
A wayward effort from 25-yards by Tom Davies was the home side’s best effort on 32 minutes.
A brilliant interception by Bakayko saw the France midfielder race forward on 35 minutes, he slid the ball to his left for in-running Pedro. The Spain midfielder took a touch before letting fly with a fierce left-footer, which Pickford did well to tip over his crossbar for a corner.
Pedro almost opened the scoring seconds after the restart, but his shot was saved by Pickford. The rebound fell to Willian and his effort was hacked off the line by half-time substitute Ashley Williams.
Sam Allardyce also replaced Tom Davies with striker Sandro Ramirez.
Everton were forced to make their third substitution, Injured Idrissa Ghana Gueye replaced by Beni Baningime on 51 minutes.
Antonio Conte made his predicable substitution on 63 minutes – Cesc Fabregas took over.
A brilliant low drive by Hazard, on 66 minutes was expertly parried away from danger by Pickford as the away side made deeper strides into the Everton defence.
Striker Michy Batshuayi came on with 19 minutes left on the clock, Willian the unfortunate man to make way.
Williams almost scored an own goal on 75 minutes, when a Victor Moses cross from the right was glanced on by Williams’s head and the ball crashed the underside of the crossbar and zipped clear.
Antonio Rudiger saw a first time volley saved once again by man of the match Pickford as the Blues went for the jugular.
Davide Zappacosta was the final Chelsea replacement – Moses came off.
The Blues face a homie match against Brighton at the Bridge ion Boxing Day.