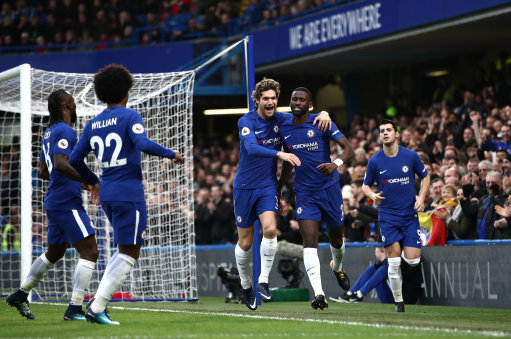 Chelsea smashed the Potters 5-0 at Stamford Bridge this afternoon but end 2017 13 points adrift of far, far away Manchester City, who also have a game in hand over the champions.
First half strikes from Antonio Rudiger, a debut Chelsea effort from Danny Drinkwater and a Pedro edge of penalty area drive saw off the men from Stoke, who, by contrast to Chelsea’s expressive and open play, were charmless, hopeless and looking at the spectre of a relegation dogfight.
A second half penalty from Willian and an opportunistic left footer by Davide Zappacosta two minutes from time sealed Mark Hughes’s side to a humiliating rout.
The Blues go second in the league for a couple of hours at least as Manchester United play later this evening, but the goal difference achieved today at least puts them within three goals of United.
Stoke were without several players including on-loan Kurt Zouma who was unable to play against his home side, and may have an eye on a more profitable opportunity for points against Newcastle in midweek. Nevertheless their anaemic showing was cruelly exploited by the west Londoners, who had five different goal-scorers, none of them designated strikers.
The perfect start for the Blues, saw their dominance of possession reap dividends on three minutes .
A regulation deep fire-klick from the right by Willian, was met, full on the head of Antonio Rudiger, who, planted a powerful header, unmarked past prone Jack Butland.

It wears the German’s second League goal fro the Blues, his third in total.
Number two came from the right boot of Danny Drinkwater, who lashed home an unstoppable half-volley from outside the Stoke penalty area, the ball zipped high and wide of Butland and into the top left-hand corner of the opposition’ s net.
Alvaro Morata should have made it three on 14 minutes when the Spain striker took advantage of an error by Kevin Wimmer.
The hitman raced into the Stoke penalty area, but, this time, Butland was on the spot to thwart the striker and the ball was cleared for a corner.
It wasn’t long coming and it was the sweet right boot of Pedro, set up by Willian, who after taking one touch on the edge of their penalty ares , side-stepping Wimmer, and planted the perfect low drive inside Butland’s right corner of the net.
There were no changes at half time by beiutrher side.
Then first chance of the restart fell to Stoke on 50 minutes. When Charlie Adam sent Ian the great through ball to Saido Berahino, who easily outpaced gary Cahill.
Thibaut Courtois, up to now, a virtual spectator, was quick to react and dived low to his left to snuff out the low, goal-bound strike by the forward.

The first change for the Blues came on 55 minutes and Davide Zappacosta replaced Victor Moses.
Morata repeated his miss from the first half in the 60 minutes when Butland was on the spot to defy the striker.
N’Golo Kante’s day ended on 65 minutes, Tiemoure Bakayoko took his place. He was quickly followed by Michy Batshuayi.
Within a minute, Willian had won a penalty after a thorough ball by Batshuayi caught the Stoke defence napping. Willian clipped the ball past Wimmer who, in turn CL;piped him and down he=ent.
He was quickly up, taking the ball off hopeful Batshuayi and promptly and cooly, swept the spot kick past Butland who went in the wrong direction.
Number five came two minutes from time. Zappacosta picked the ball up from the edge of the penalty areas and unleashed a low, left-footer past a despairing Butland.
Next up for the Blues is a trip to north London on Wednesday to face Arsenal in the league.