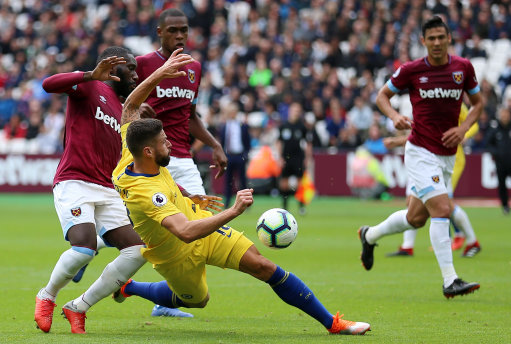 Olivier Giroud is rueing the lack of wing play that hampered his chance of scoring during the 0-0 draw against West Ham on Sunday but believes Chelsea has enough quality and that includes keeping want away Gary Cahill, to beat Liverpool tomorrow night in the Carabao Cup.

French hitman Giroud said of the dour draw at the London Stadium: “It was frustrating. As a team we didn’t succeed in finding the solution.

“We tried too much to play inside and against a strong defence like that.

“It was very hard to combine, especially in the last 30 yards. “Maybe we should have gone a bit more on the side and put in more crosses into the box. “We are aware about that and we will work on it. We want to bounce back as soon as possible. Giroud will be keen to vent that frustration against Liverpool at Anfield tomorrow night and at the Bridge on Sunday in the Premier League.

“I keep a positive energy for the next game,” he said.

“I always want to take this frustration to transform it into a positive thing for the next game.

“Now we are going to look at what went wrong against West Ham. Even though we didn’t do so well, we could have won the game at the end of it. “It’s disappointing we lost two points, West Ham were happy with this draw. We have two big games against Liverpool this week we want to show our strength, our character.”

Much of the character of the side in the past eight years has come from centre-back Cahill, who, last week, lifted the lid on his personal turmoil at not featuring under Maurizio Sarri – ironically he was a used substitute at the weekend and suggesting he will seek a move away from Stamford Bridge in January.

Giroud said of the defender: “We need him. We have a lot of good players who can play in the starting 11.

“The problem is we have five centre-backs and the coach made his choice. “Gary is not in a good position because it is quite tough for him, he doesn’t play so much. I understand that he wants to play more.

“At one stage I was the same and I didn’t like that. We are happy when we are on the pitch. I think his heart is still in Chelsea and hopefully we will keep him because we need him. He needs to be happy, that is the main thing.

“But I hope he stays because he is important for us.

“He is one of the faces of Chelsea.”