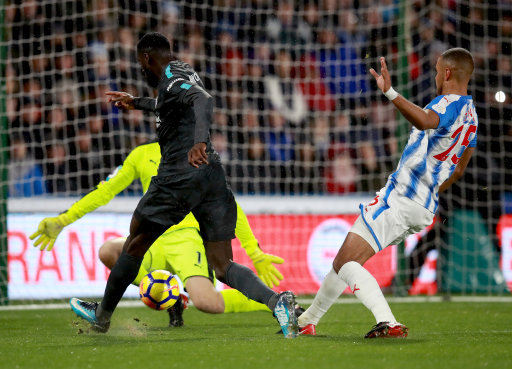 A quite brilliant Chelsea performance earned all three points at Huddersfield Town tonight as goals from Tiemoure Bakayoko, Willian and Pedro humbled the Terriers.A glancing header by Laurent depoitre, the last touch of the game was a minor consolation for the home side.
Chelsea certainly learnt their lesson from their anaemic performance on Saturday when they lost 1-0 to West Ham by totalling controlling the proceedings at the Kirklees Stadium.
With striker Alvaro Morata absent due too a back injury, Antonio opted to keep reserve strikers Michy Batshuayi on the bench.
Instead, he put mercurially-talented Eden Hazard at the head of the attack, and the Belgium took to the role like a duck to water – which was handy as the rain pelted down all evening.
Chelsea cement their third place in the Premier League, level with Manchester United on 35 points.
How they much be ruing those defeats to relegation-haunted Crystal Palace and West Ham.
The first goal came on 23 minutes when a swift move involving Willian saw the ball latched onto by in-running Bakayoko, who, 10-yards out on the left, slotted on a goal-bound left-footer past Jonas Lossl. The hapless Chris Lowe, knocked the ball over the line but it was the French midfielder goal to claim..
Lowe was at fault three minutes from the break when another swift move by the champions saw the ball moved out to the left to wing-back Marcos Alonso, who sent over a deep cross, which was missed by Lowe, and Willian popped up to head home to double the score.
Bakayoko could and should have scored seconds earlier but his header from a Willian free-kick went inches wide of the home side’s goal.

There was no change by Conte at half-time.
And there was no change by the Blues on the pitch as they rattled the Yorkshire side.
It took just five minutes to extend their lead to three. Alonso, again on the left, sent in a sweet left-footer from the left, Willian controlled the ball and touched it back to Pedro. The Spanish wide-man made no mistake by smashing a fierce right-footer high into the Huddersfield net.
Victor Moses and the hazard in quick succession almost struck more goals, but Lossl saved well.
A long-range effort by Mathias Zanka on 63 minutes was the closet in the game the home side had to an effort on the Chelsea goal, but the stinger sailed helplessly over Thibaut Courtois’s crossbar.
Conte replaced Hazard for Michy Batshuayi on 65 minutes, but not before the Belgium back-heeled a sensational pass to Pedro, on the edge of the Terriers penalty area, who really should have driven the ball home rather than slice it wide of goal.
Danny Drinkwater entered the fray for N’Golo Kante, on 70 minutes, – Conte clearly sensing the game was won and this saving him for their home clash with Southampton on Saturday.
.Ethan Ampadu, still only 17, came on for Andreas Christensen with 10 minutes left on the clock.
The Blues comfortably ran down the clock, conserved some energy for Saturday’s encounter and bagged all the points.