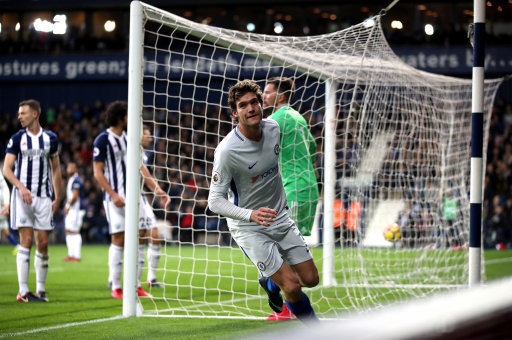 Chelsea routed WBA this afternoon 4-0 with a brace from Eden Hazard and a strike apiece from Alvaro Morata and Marcos Alonso.
The Blues go second in the Premier League albeit for a couple of hours as Manchester United face a home tie against Newcastle United and could reclaim that spot.
However significantly Chelsea leapfrog Spurs who lost 2-0 to Arsenal in the early kick-off.
Aware of that result, The Blues knew that they had to get a positive result against the Baggies and they did that with a lot to spare.
They were sensational in front of goal with Morata in particular showing glimpses of his undoubted talent.
Aided by the mercurial duo of Fabregas and Hazard on scintillating form and the Blues are devastating on the counter-attack
And they cut the home side to shreds on numerous occasions and could have scored seven or eight.

All the early pressure by was from WBA, especially on the break. Jake Livermore, on four minutes, fed the ball wide to Matt Philips. His cross into the six-yard box, was met by the head of Jay Rodriguez which Thibaut Courtois did well to get to.
A minute later Salamon Rondon had the ball in the back of Chelsea net after his powerful header squirmed under Courtois’s body. But he was adjudged to be offside.
Tiemoure Bayakoko had a swift turn and shot from just inside the WBA penalty area deflected for a corner as the Blue midfielder looked certain to score.
But inevitably, on a break, Eden Hazard was the architect of the opening goal of the game on 17 minutes. The belgium playmaker, shrugging off a limp, cruised through the WBA defence and left fly a venomous left footer, which Ben Foster could only parry away into the path of Alvaro Morata, who slid an angled left-footer into the empty net.
Chelsea second on 22 minutes was made in Spain and finished in Belgium as Cesc Fabregas fed a low ball to Morata, who beautifully back-flicked the ball into the path of Hazard, who raced clear, rounded Foster and, like Morata slide the ball with his left foot into the net.

Chelsea’s third was simplicity itself. An angled, clipped free-kick by Fabregas to the far post, on 38 minutes was met by Alonso’s left boot, and the unmarked wing-back thrashed the ball into the top of Foster’s net.
Fabregas went into Jonathan Moss’s book for an alleged dive on 50 minutes when the midfielder looked like he was upended by Jonny Evans. That was levelled up three minutes later when Rondon saw yellow for a similar dive while under pressure by Andreas Christensen.
Number four was a beauty too. An inch-perfect ball, on 63 minutes, by Fabregas, was controlled in one movement by Hazard, just outside the penalty area. He then skipped past Ahmed Hegazi, took one more touch before planting the ball perfectly into the back of the Baggies net.
Perhaps with the Champions League match on Wednesday, away to Qarabag in mind, Antonio Conte decided to give playmaker Fabregas a rest and replaced him with Danny Drinkwater. He was quickly followed by Pedro who replaced Hazard.
The final substitution saw Willian enter the fray at the expense of N’Golo Kante.
WBA’s substitute James McLean should have score with seven minutes left, but after powering through, he screwed his shot wide of Courtois’s goal.