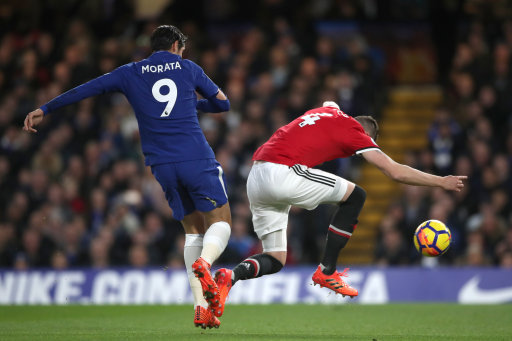 Chelsea thought they took an early lead in this must-win match against Manchester United this evening at Stamford Bridge.

Marcos Alonso whipped in a great left footer from the left. The ball bounced off Phil Jones, under pressure from Alvaro Morata, and the ball smashed into the United net of his knee.
However referee Anthony Taylor instantly disallowed the effort, suggesting Morata had pushed the centre-back over.

The opening 45 minutes was a catalogue of mistakes and poor finishing as the home side dominated play. United’s best effort fell to ex-Chelsea striker Romelu Lukaku who powered a drive from just outside the Chelsea penalty aera but Thibaut Courtois did well to get down to his right a parry the ball away.

David de Gea tipped away a powerful Eden Hazard shot, with Cesc Fabregas hitting the follow-up into the side netting  as the Blues looked the most likely to take the lead.