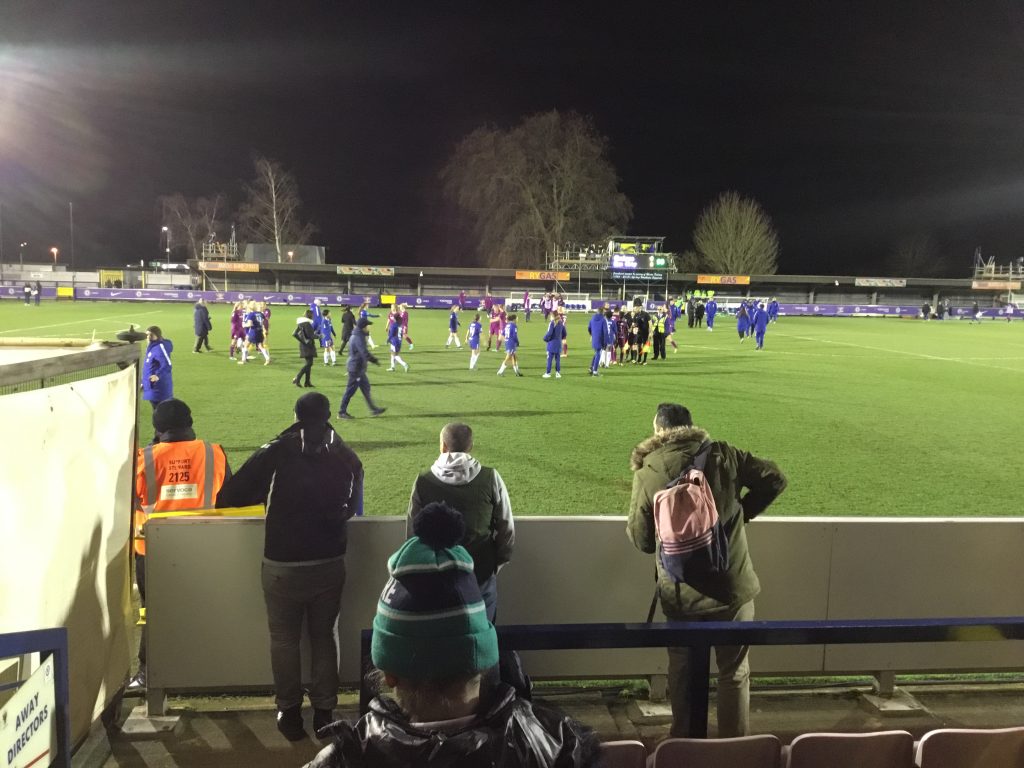 Chelsea failed to leapfrog leaders Manchester City at Kingsmeadow Stadium tonight as the West London Blues drew 0-0 against their bitter rivals.
The best chances fell to Chelsea but the Manchester women were robust and resolute in defence.
No quarter was given by either side but the visitors will be the happier of the two major forces of WSL 1.
Clinical finishing was missing by Chelsea with Fran Kirby looking off the pace.
The first action of the game revolved around City goalkeeper Karen Bardsley who, after two minutes, took a clatter from Chelsea striker Drew Spence. The England stopper watched by New England manager Phil Neville can only hope that the 10 minutes of on the field treatment does not force a long-term absence. Ellie’s Roebuck was her replacement.
City’s Jill Scott had the first effort on goal, but Hedvig Lindahl easily smothered the low drive from the nudge off the Chelsea penalty area.
With American Crystal Dunn back from her training camp with the national slide, the Blues had a player of pace on the left and were seeking to exploit that.
Her and Fran Kirby worked the line well. But found found the City rearguard a tough act to get through.
That combination worked a treat on 34 minutes with Kirby not at her most clinical finishing. The ball was hatched away for a corner. Ramona Bachmann did at last force Roebuck intro a save on 26 minutes. A chance the Blues could rue.
A mistake by Millie Bright allowed Mel Lawley tom steal a ,march and she raced into the Chelsea area. Her byline cross was deflected away from goal for a corner.
Nikita Parris was in anguish on 39 minutes as her her goal-bound shot nicked a deflection, while the pace of the shot was taken out. Lindahl did the rest.
Jill Scott entered the referee Amy Fearn;s book for a very late tackle in midfield on Ji- So-Yun.
There was no change for either side at half-time.
Phil Neville, first down the tunnel to the tea room at half-time was almost the last to get back to his seat in the second.
A terrific free-kick by Steph Houghton, inched over Lindahl’s crossbar on 50 minutes as both sides went fore the all-important opening goal.
Skipper Maren Mjelde left the pitch injured on 57 minutes – Katie Chapman replaced her.
Chelsea then applied the pressure with three chances But City held firm.
It was end to end stuff closed to the end, Kirby unlucky with hw curling right-footer with three minutes left on the clock.