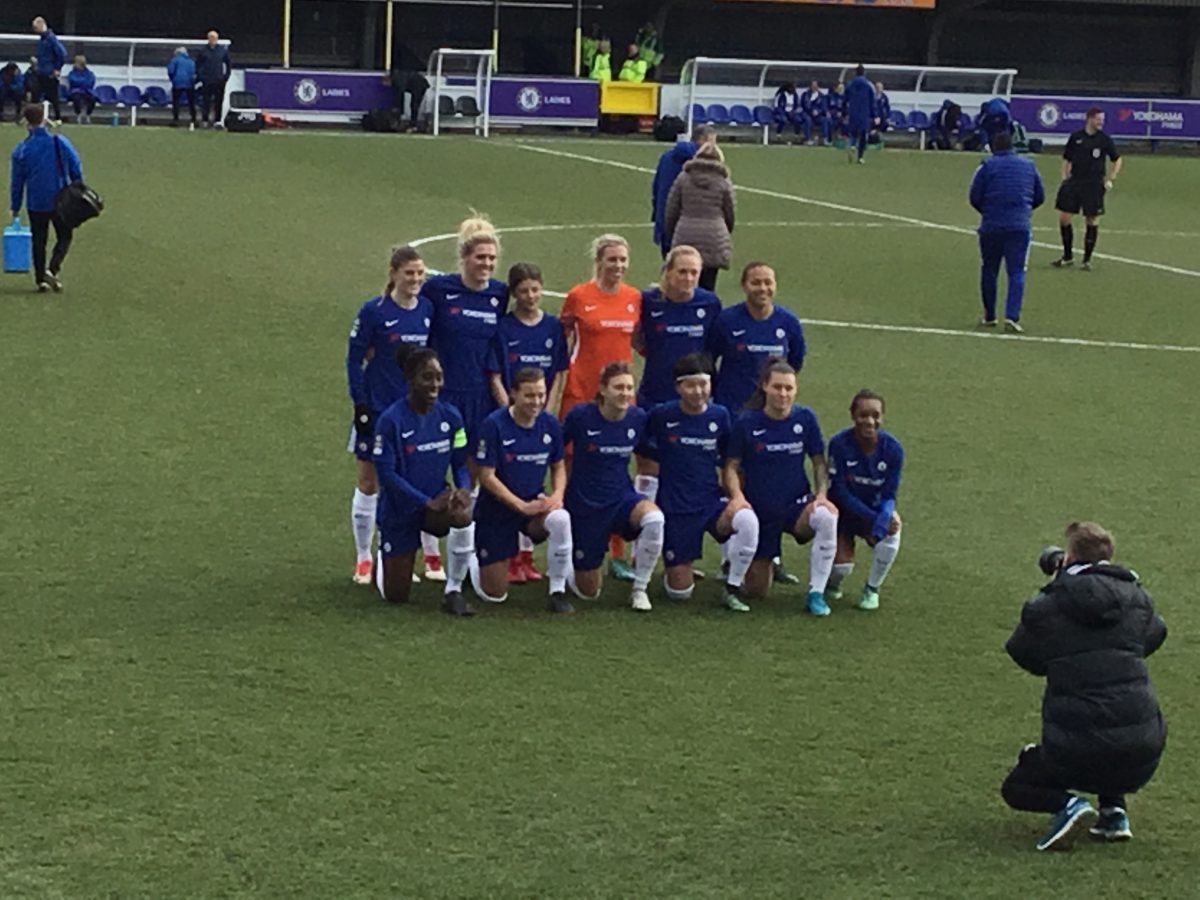 Chelsea cruised into the quarter-finals of the FA Cup with a resounding 6-0 thrashing of Doncaster Rovers Belles at Kingsmeadow this afternoon.
After a tight first half where only a Ji-Sun Yun goal separated the Blues from the side top of WSL 2 the floodgates opened in the second as Fran Kirby, Drew Spence, a brace from substitute Erin Cuthbert and a penalty from Ramona Bachmann completed the rout.
Chelsea’s opening phase on top almost reaped dividends on 10 minutes when they cut the visitors apart. The ball fell to Ji-So Yun, who uncharacteristically panicked with her shot and it flashed high over Bethan Davies crossbar. But two minutes later, class told and the power of the Chelsea attack saw Yun produce a smart save by Davies, but the ball fell invitingly back to the South Korean, who volleyed the ball into the back of the net.
Maren Mjelde smacked the crossbar on 22 minutes as the Blues were camped in the Belles half.
Carly Telford half-punched out an effort from Leandra Little following a free-kick on 25 minutes.
There was panic in the Blues defence as the Belles have a number of tall players which they failed to adequately deal with.

Two minutes before the break, Ramona Bachmann should have scored. She picked up the ball from Drew Spence, produced a quick turn and shot. But the shot, from the edge of the Belles penalty area was woefully wide.
There were no changes at half-time by either side.
The Blues restarted with purpose and within a minute Drew Spence drove a fierce shot, goal-bound. Davies, at her near post smothered the effort.
Jessica Sigsworth should have equalised two minutes later when Kirsty Hanson cut the Blues defence apart. Her byline cross was just out of reach for Sigsworth however and Crystal Dunn was on hands to clear.
Thankfully that fright was short-lived as Chelsea took a two-goal lead on 49 minutes.
Excellent close-control plays by Yun and Kirby saw the England striker gain some space on the six-yard box and she slotted cooly home.
Davies then produced a fantastic save, thwarting Bachmann.
Three minutes later and the tie was effectively over as another counter-attack saw Yun clip the perfect ball into the Belles penalty area. Spence collected the ball in one quick movement and rammed the ball into the top of Davies net to make it number there.
Emma Hayes decided to make a couple of changes – with a midweek game away to Yeovil Town on Wednesday and a surefire league title decider away to Manchester City Women on Saturday, off came Kirby and Spence to be replaced by Eni Aluko and Erin Cuthbert.
And within minutes the duo set up the fourth goal. Another quick break saw Aluko on the right send in an inviting cross and Cuthbert produced a wonderful header that zipped past Davies.
Aluko was a thorn in the Belles defence with her pace and following a defence-splitting pass by Cuthbert, Aluko raced clear only to be upended by Izzy Whittle.
Bachmann stepped up to take the spot kick and thumped it high and wide past Davies for number five.
Two minutes from time and once again the ball fell to Cuthbert who zipped the ball past Davies for her ninth goal of the season and Chelsea’s sixth.