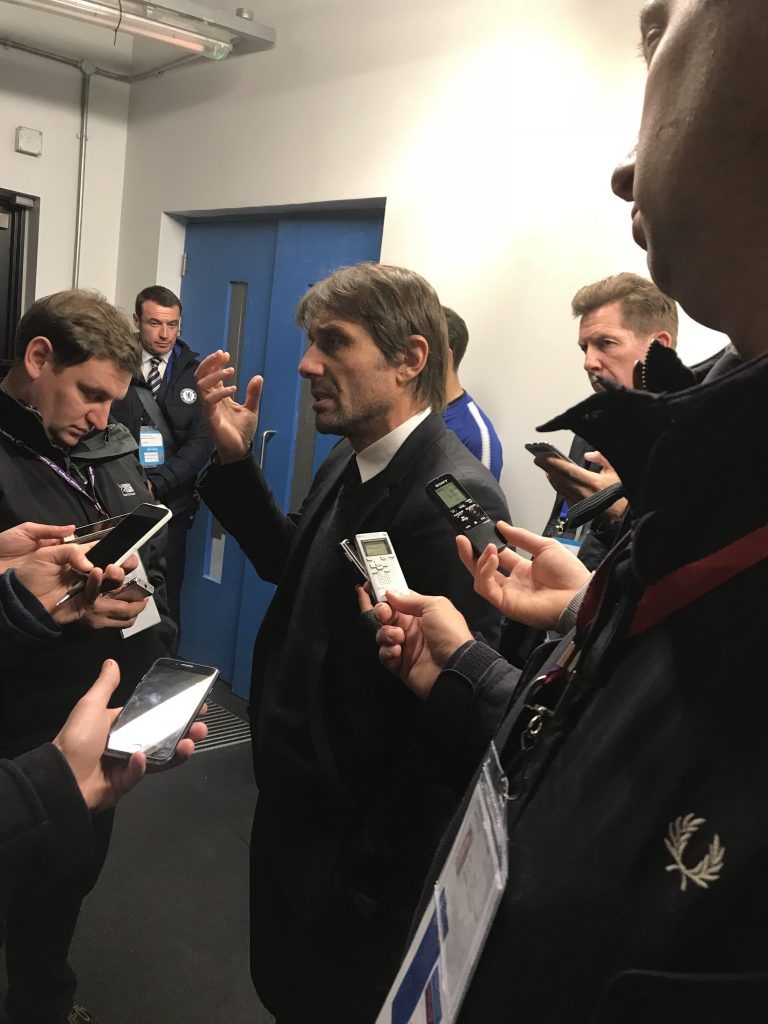 Antonio Conte defended his underfire  midfielder Tiemoure Bakayoko following his side’s disastrous 1-0 defeat to West Ham United on Saturday.
The Blues boss has now conceded that his title defence is in tatters and in fact, never really got off the ground following their opening day defeat to Burnley and subsequent defeats to Manchester City, and Crystal Palace.
Of his £40million signing from Monaco in the summer, he said: “I must be honest, it was only a tactical decision I replaced him at half-time. We were 1-0 down and to play with a powerful player in that moment, I think it wasn’t the right decision. Also because our opponent was with 11 players behind the ball, in this case you have find the right solution to have the right players who are more technical, faster and better in one-v-ones.
“For this reason, I decided to take this decision. I must be honest, I liked his performance in the first half. He did what I asked of him. It was only a tactical decision to change something to have a player with more quality between the lines and also to finish.”
Chelsea lost to a seventh minute Marko Arnautovic goal.
“Our start was bad,” said the Italian. “We conceded a goal and I also think that in the first 20 minutes that we didn’t win a tackle and we lost a lot of stupid balls.
“Then after we went 1-0 down, we tried to have a good reaction but at the same time, I think I saw many players who were a bit tired.”
Conte explained the priority he has in regard to the title defence.
“There are six top teams and there are only four places for the Champions League and two places for the Europa League. You have targets, also if Manchester City has many points over you, you have an important target to try to get into the top four and play in the Champions League. Don’t forget, two years ago Chelsea missed this target, last season we didn’t play European games. Conte knows that he had little time to get his players in shape as they face Huddersfield Town tomorrow night away in Yorkshire.
“Where is the time to kill the players in training sessions? We rested on Sunday and today, I have to prepare in 20 minutes the game against Huddersfield.”
Conte is worried that despite lots of possession and chances on goal, there is a a distinct lack of goal output. It’s not a lack of confidence that concerns hi,.
“It is not right to lose confidence,” he said.
“And also don’t forget on Saturday we shot 19 times but we didn’t score. For sure, we have to improve our finishing and be more clinical. In the game against Atletico Madrid, the same thing happened because we created many chances. We scored but it was an own goal.
“This is for the whole team, if you remember against Atletico, Christensen had two chances to score and also we have to improve as the whole team in every situation. Not just for this, this or this because we want to tell this to the players. We are a team and we must improve as a team.
“Against Swansea, we won only 1-0. Against Newcastle we won 3-1 but we created a lot of chances to score. We must learn to be more clinical then to rest and recover more energy because it is not simple to play every three games.”
Conte would not be dawn on potential signing, despite the January transfer window only weeks away.
“I think now this is not important because we have just started December and we must be focused on the games ahead. I repeat, I can give my opinion to my club and also I speak with my club. I can give my opinion but the final decision is for the club. It is right to be in this way.”
It seems just mentioning the name Roman Abramovich forces people in Chelsea to clam up.
Asked if he had a conversation with the club’s owner regarding signings, he said: “I think, honestly, that it is right to keep it secret if we have a conversation with the club.”