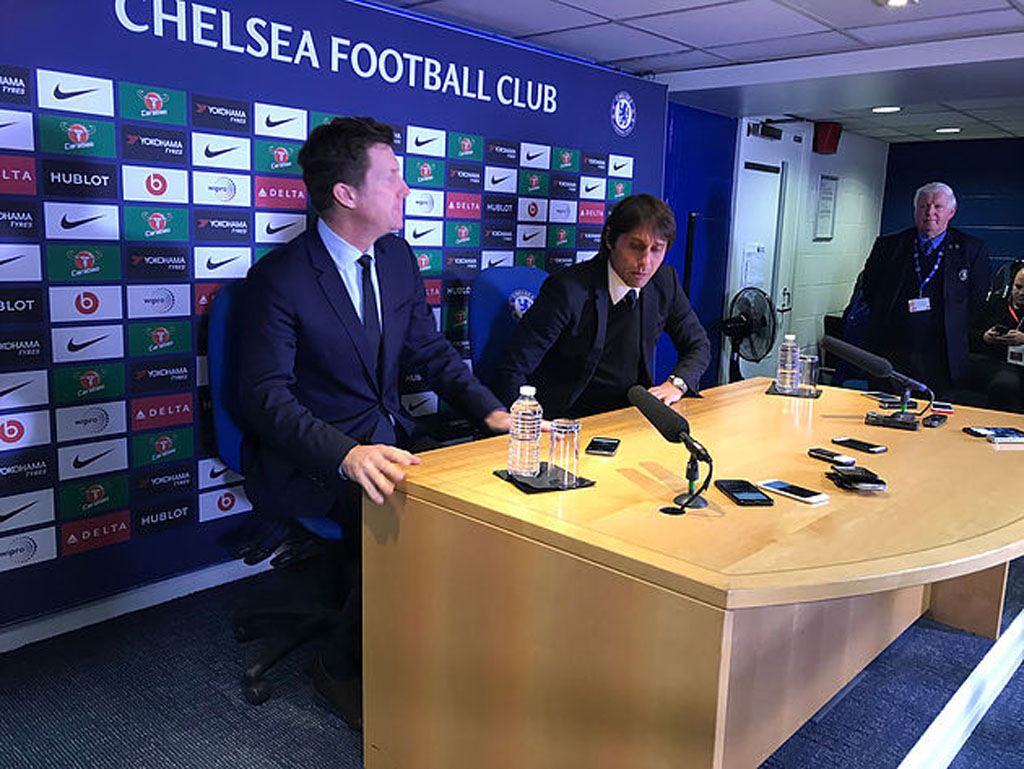 Antonio Conte is not a happy man.

There is a sense of smothering anger beneath his calm exterior and last night’s horrendous 3-0 home defeat to Bournemouth would not have helped matters.

“It was a tough night, but if you remember very well, I predicted this tough night, I said it would be very, very tough for a lot of reasons. It happened, it happened. But now we have to move on and see the next game.” That game will be away to Watford on Monday where they will hope to have a striker on the pitch.

Alvaro Morata is injured but Olivier Giroud, signed from Arsenal for £18million should make his bow.

Conte was not making excuses for the defeat – Michy Batshuayi went to Dortmund.

“Now it would be very simple to find a lot of excuses, a lot of alibis,” he said.

“I think the players tried to do their best. Honestly. The commitment of the players was great. But, despite this, we lost. We lost the game.

“It was a bad defeat. But football is not simple. You have to prepare, to study, and then to try and prepare for every situation, every game, every season. Now the most important thing is to understand we have to fight. This season will be very tough. We must be ready to struggle this season for everything.”

Another player out injured is Andreas Christensen with a hamstring injury, and Conte is not no blaming tha loss for the defeat.

“We played other games without Christensen. With Cahill in the middle of the defence. We won and didn’t concede a goal. Injuries are a part of the game. I think it’s not right to find excuses.

Conte said of the Brazilian: “I don’t know, I don’t know, because he had a problem in his ankle. He started the training session with the physical coach.”

With the possibility of dropping out of the top four by Monday night open, Conte said of the pressure on him: “But I think, about the pressure, it’s normal. It’s normal for a coach, for a manager. It’s normal if you are Chelsea’s coach. After the first game this season, you tried to put pressure on my job. But I’m trying to do my best. If someone doesn’t think this club deserves this table [position] or deserve this situation. I repeat: we are doing everything, we are doing 120 per cent.

“I’m exploiting this squad at the maximum level. But, if someone doesn’t agree about this, I’m here. I have to accept every situation. I’m very relaxed about this. I know that I’m doing a great job, a great work, me and the staff and the players.”

Are these players overachieving?

And is he worried about the top four?

“It won’t be easy this season, and we have to fight. We must be prepared to fight and ready to do this. I’m ready. I think the players are starting to understand that this season we have to struggle for a position in the Champions League.

“But I think the players, until now, are great. Are very, very top. For their commitment and their behaviours. If they hadn’t done that, our place in the table would be worse.”

Will the top four be more difficult to get after the transfer window has now shut?

“We have to understand that, if we want to speak about football and if we think to understand football we know very well this will be very difficult for us. If we want only to dream and not see the reality – in this case, I can tell you now we can fight to win the title this season.

“It will be very important to look at the reality and to know that, if we are able to reach a place in the Champions League, it will be a great success for us. Otherwise we have a normal season.”

Is the owner a realist or dreamer?

“I don’t know. My task is to try to be more realistic if possible and try to transfer this to the players, because the players if they know and understand the danger. But the players are fantastic in their commitment. They understand very well what our situation is in this season.”