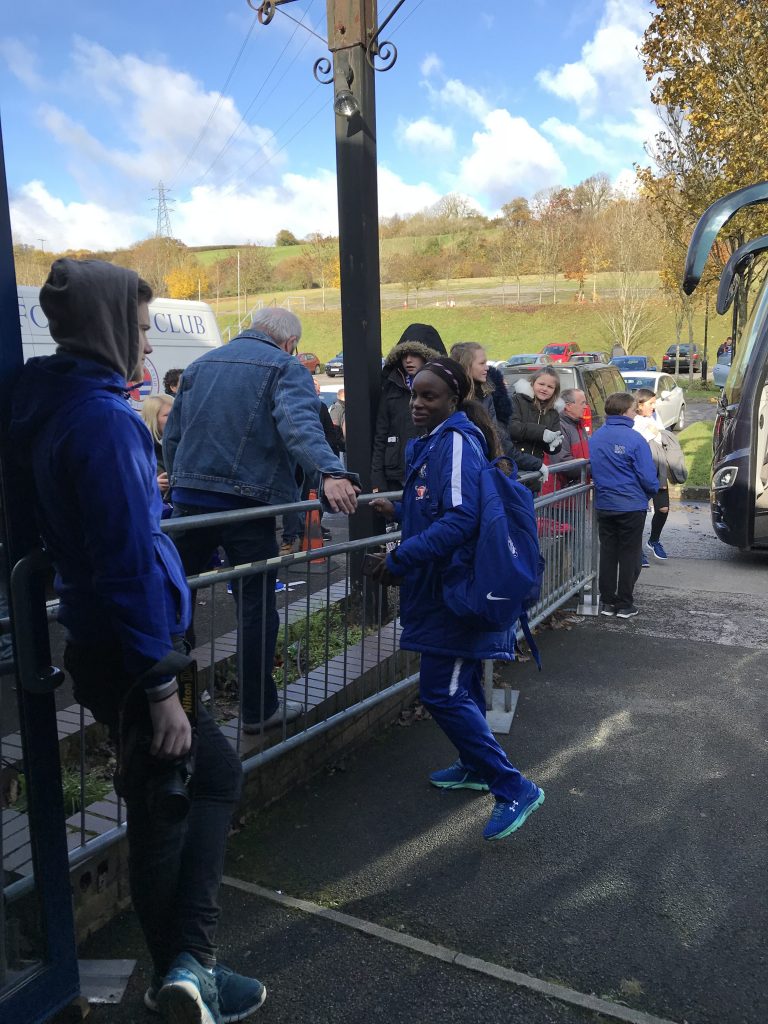 Chelsea Ladies lost top spot of the WSL 1 when they drew 2-2 against Reading today at Adams Park. The Blues went 1-0 down before clawing themselves back into the game with goals from Karen Carney and Eni Aluko, but a sucker punch of a headed own goal, deep into added time from Magdalena Eriksson resulted in two points dropped.
Manchester City took advantage of the result to leapfrog the Blues by thrashing Bristol Academy 4-0 later on in the day.
Livewire Aluko said: “It’s gutting. Sometimes when you draw a game like that in the last minute it feels like a loss, it’s not. Reading are a very strong team this year – a team, I think will compete for the title. We knew it was going to be a scrap and a battle. It’s disappointing, we thought we had won the game, but you know, it’s a tough one to take. But we have got to pick our heads up as we have a big game on Wednesday and we want to qualify for the last 16 of the Champions League for the first time in our history.”
Chelsea also conceded goals for the first time in the league this season.
“I think the clean sheet record is always something that was going to be broken at some point,” she said.
“It’s nice when you keep clean sheets. I don’t know any side that has ever not conceded a goal during the season. So that’s by the by. The most important thing is to try and win the three points. We didn’t but Reading are a team that will upset other teams.” Was there an element of complacency in the side? Aluko does not think so: “I don’t think it was complacency in terms of mentally towards the game. We very much knew it would be tough. But in the first half, the game plan we probably did not execute as well. We played into the midfield a lot and Reading were picking up the second balls, so we had to fix that. We did that in the second half, we picked up the second balls, we were getting into their box a lot more. But ultimately they played until the last minute and they scored. That’s the way it works.”
On Wednesday, it’s the Champions League against Rosenberg. The Blues are 3-0 up from the first leg last week.
Aluko said: “We put ourselves in a really good position. But we can’t take anything for granted.
Rosengard won’t be happy with that. We need to perform like we did last Wednesday and make sure we qualify.”
Chelsea Ladies have a chance to make a piece of club history by getting deeper than ever into the later stages of the Champions League.
Aluko agrees: “For me, as someone who has been at the club for so long, it’s something special, to be in a position to say that because the draw hasn’t been kind to us over the years. We just haven’t been up to par with the other teams. But now we can say ‘Look, if we can perform well on Wednesday, we can qualify for the quarter-final and that is really exciting.’” Chelsea let a lead slip against Reading, Aluko doesn’t want to see a repeat on Wednesday.
“Exactly,” she said. “You have got to look at results like this, and see it as a kick up the bum a bit and sometimes you need that. We haven’t lost, we remain unbeaten, still. But we now realise that we can’t wait until the second half to get going.
“We need that, we are humble people, we will address it, talk about it. but it’s not the end of the world. When we look back at this at the end of the season, it might be a very important point.”