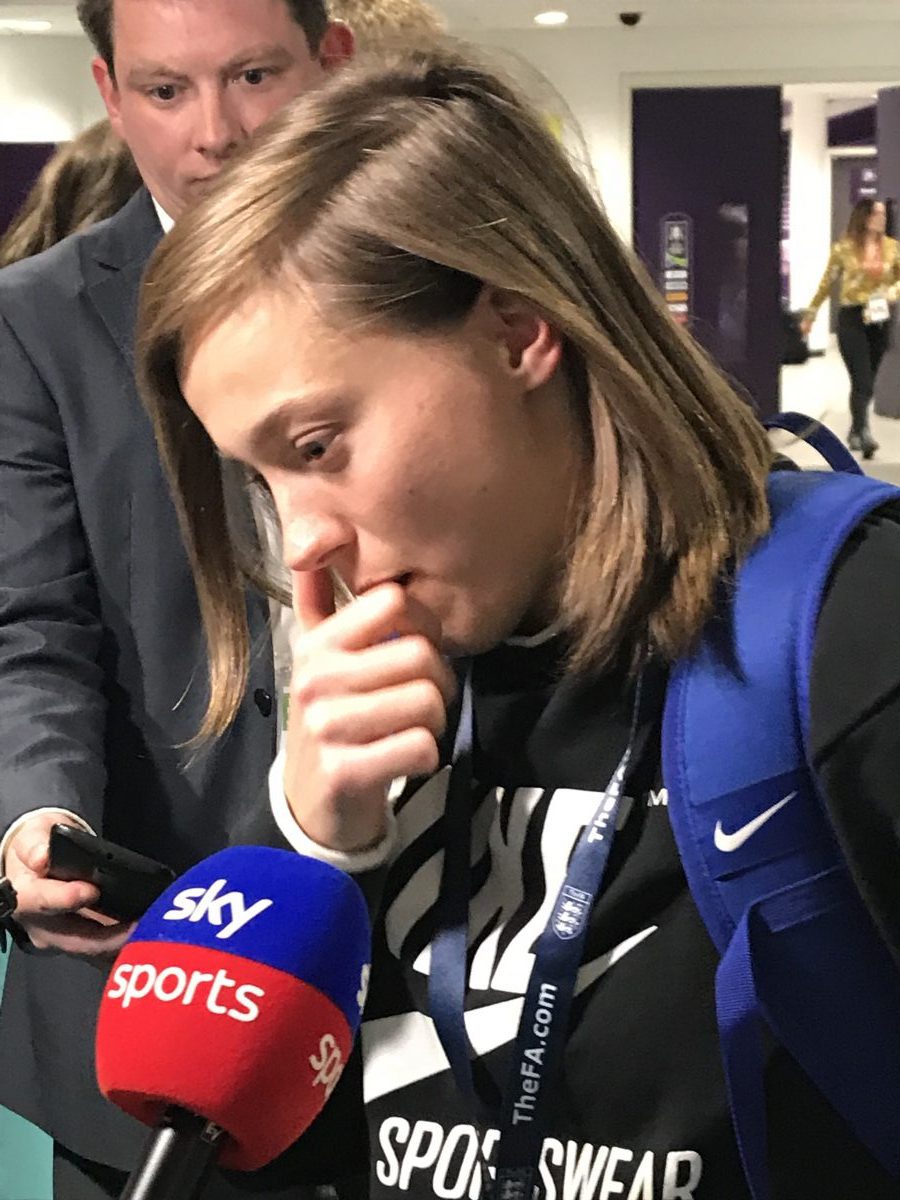 Fran Kirby smashed her 23rd goal of an incredible season yesterday as the Blues overwhelmed Arsenal in the Women’s FA Cup Final at Wembley and then  declared,” I am going to get better.”

Kirby, 24, has sent out a warning to the rest of the WSL 1 as the Blues focus on their remaining four league games that see them go toe-to-toe with Manchester City for the title.

But it was her explosive left-footer belter that halted any Arsenal comeback and sent the majority of the 45,000 crowd into raptures.

Kirby was quite happy too.

“When I scored it was a massive, massive relief and joy,” she said.

“We dominated the game and I think we were very disappointed to concede a goal.”

“It was expected and a bit unexpected too that they were defensive,” she said.

“It’s an FA Cup final, and  you have to prepare for everything.

“They obviously respected us a lot, and maybe in the first half, we were a little bit too intricate with our passing instead of pulling the trigger from outside the box.

“But they defended well and it took a really special goal from Ramona Bachmann to put us ahead.”

Switzerland international Bachmann score the opener seconds into the second half and added a second soon after.

“She can hit them,” said England striker Kirby.  “But if you ask her she will probably say that she doesn’t score enough. But her contribution to the game is massive. The hard work she puts in, she always  happy with anyone else scoring so long  as she is working hard and gets an assist. “She saved it for a big day and that the most important thing.”

Kirby will be presented with the inaugural Football Writers’ Footballer of the Year award on Thursday evening at a glittering dinner at the Landmark Hotel. She add that to the players’ award. It meant she was under immense pressure to perform – she did, but took it in her stride.

“I try and switch off from all the media hype, if I’m completely honest,” she admitted.

“I think there is always a pressure when you play for a club like Chelsea no matter who you are. In the last two weeks it’s been great for myself. But I stress to the media, that I want to win trophies with my team.

“Obviously there is a pressure on that, but I switch off, away from it. This is a game that I love, so as long as I’m smiling and enjoying myself and hopefully I’m playing well.”

She has battled back from injury inn the past year to produce the form that boss Emma Hayes describes as incredible but Kirby knows she can do better.

The single-minded striking assassin said:  “There is more to come. I think I can get myself fitter. I have been working really hard, by myself in the gym to get myself to the required level. And there is still more to give and I hope to bring that out next season.”

Next up for Kirby and the women is a home trip to Kingsmeadow Stadium on Wednesday evening, where they face Birmingham Women in a crucial WSL 1 game.

“We want to celebrate as much as we can following Saturday’s cup win, but our full focus has to be on the game on Wednesday,” she said.

“And all the girls now have that extra bit of motivation to go on and push. It was tough, the past couple of weeks, getting through it – and we must not get into holiday mode which is the most important thing.

“We have a dressing room full of people who want to win the league. I don’t think we need any external motivation, we have that ourselves. We need to stay focused and the FA Cup win will add to that now. Everyone is thinking  ‘we  can’t switch off, we have to keep going.’”

And as for their brilliantly supportive crowd, Kirby is full of praise.

“They were absolutely magnificent. It shows where women’s football is going. All the people at the ground, listening to the radio, watching on the TV, this is what we are trying to do for women’s  football. So long as we can keep performing on the pitch, hopefully people will enjoy it off the pitch. Women’s football is growing and we are going to do everything we can to get it to its maximum level.”