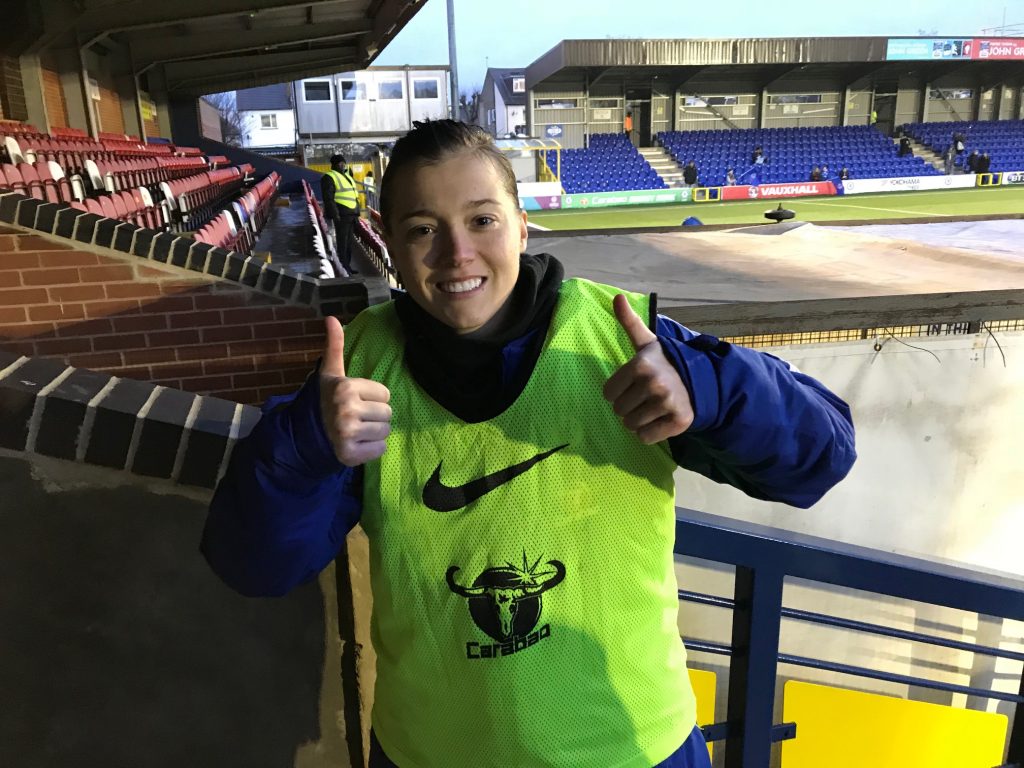 Fran Kirby may only be 5ft 2inches tall but she is a giant in the women’s game and her hat-trick today for Chelsea Ladies against Liverpool in the Continental Tyres Cup quarter-final exemplified why she is known as the Mini Messi of the game.
The mercurial forward, 24, destroyed the Scousers with her lightening pace and devastating finishing and she has her sights set on scoring more goals before the season is over, which should make the rest of the WSL 1 league sides quake in their boots
Speaking straight after the thrashing of Liverpool, she said: “I love to score goals. If I can get a hat-trick, that’s great, but you have to look at the overall performance.
“For me I’ve always been a person who wants to score as many goals as possible. I feel that I did that at Reading and when I came to Chelsea. I’ve always fallen into the top two of highest goal scorers.
“I just want to get building and progressing and hopefully keep scoring goals for the team. And win which is the most important thing.
“Again Liverpool, our movement up front was fantastic, obviously we were disappointed to concede a goal, but overall we have to be happy.”
Kirby believes that following a spell out of action with a knee injury in 2016 has meant that she had to come back stronger and fitter, and now she is back to her best.
“I’m feeling fit and strong,” she said.

“I’m just happy to play as much as I can and play well for Chelsea, and hopefully keep playing well for England.
“Obviously it’s difficult, when you have a long time out, you have to find, your form, your feet and get fit again.
“In the past couple of months I have found that again. It took a while. And anyone will tell you, it’s difficult to come back from an injury and then get a setback and then another setback. Mentally and physically I know that I still have some more to give.”
And as if to warn her future opponents she feels she needs to add more to her attacking game.
“I need to add to my game the final product in and around the box,” she said.
“I’m trying to link up more, trying to get more assists. Not try and hog all the goals. Every player can improve and I just want to do well for club and country.”
The Blues conceded a goal at home for only the second time this season, and Kirby felt that a sloppy start to the second half was to blame.
“I think the second half was a bit like that,” she said. “I think we were dominate in the first. Obviously they were a threat from set-pieces and we worked on that. We were disappointed to concede the goal, but at the end of the day, we kind of knew, that they probably weren’t going to score three goals against us. But that’s no excuse to concede. The first half we were really dominate, the second half we sat off a little bit and got a bit sloppy, but that something we need to clear up as a team and keep going in the same direction.”
That desire for improvement is what inspires Kirby and others to get better. But the pressure to stay in the side is equally enormous.
There is a great deal of quality sitting on the bench and others not even in the match squad.
“Yeah,” she said. “Definitely. Everyone has to perform. We have got some world-class players sitting on the bench, so we need to perform to the highest standards in every single game. For strikers, we have to be scoring goals, midfielders have to be working hard, it’s such a competitive squad. But everyone is enjoying it. And so long as we are winning, everyone is happy.
Last week saw the top of the table clash against Manchester City called off due to bad weather.
It seems Liverpool may have suffered a backlash from that inactivity.
“Yeah, it was really frustrating,” she admitted.
“You get yourself really psyched up for the game, and then it gets called off. Everyone was really ready to go, really excited. We had had a good training week. But obviously we came out against Liverpool a little bit more fresher than we would have if we had played.
“We just have to take every game when it comes. If we can perform in other games after a cancellation, then that’s great. it’s not like we went sloppy because we didn’t have a game.

The Blues next match is a league outing, at home against Arsenal on January 7.

“We get a nice little break now for Christmas but we are back in again just after, so we have a good few weeks to train ahead of the Arsenal game which will be another big game for us, and one that we are really looking forward to. But now, we need to rest, recover, make sure we keep on top of our fitness but overall have a good time at Christmas.”
And what is Mini Messi hoping to find in Santa’ sack on Christmas Day?
“I’m not that fussy, but I have asked for a new laptop because I’m going to start studying again.
I actually going to look into journalism.”
I suspect that if her shorthand becomes anywhere close to her speed in the opposition penalty area, then 100 words per minute will be achieved very quickly.