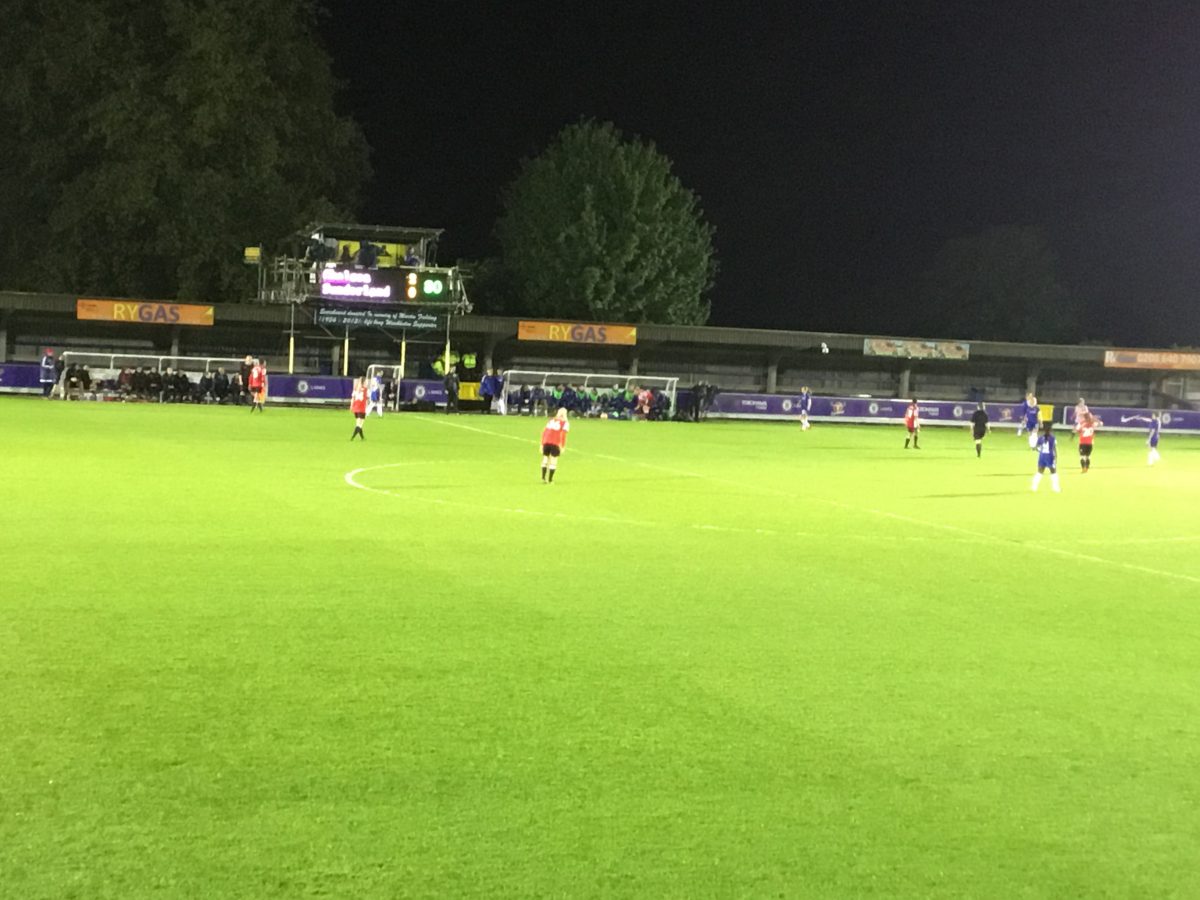 Chelsea’s are within one win of lifting the WSL1 title following this comprehensive 2-1 victory over Sunderland Ladies at Kingsmeadow Stadium tonight.

Goals from Fran Kirby and Eni Aluko saw off the North-East challenge, with Kiera Ramshaw scoring late-on for the visitors

With nearest challengers Manchester City losing earlier in the day to Arsenal, The Blues are six points clear of their rivals and a point at Tuesday’s match against Bristol City Women at Bristol in the penultimate game of the season will see them crowned champions of the WSL1.

They face Liverpool away on Saturday in the final game of the season.

But this was also a game to celebrate the career of Katie Chapman, who retires at the end of the season. The 35-year-old Chelsea midfielder was given a guard of honour by both sides as she entered the pitch, flanked by two of her three children. It was also her 100th match for the west Londoners.

The first effort of note on goal, came from a lone range effort by then visitors’ Lucy Staniforth on six minutes. The ball dipped at the last second and Carly Telford, in for Hedvig Lindahl, easily snuffled the 35-yarder.

Chelsea took control of the game, possession-wise as Sunderland opted for a defence-first policy with occasional counter-attacks.

The inevitable pressure finally told and, who else but ‘super’ Fran Kirby, was on the spot, on 42 minutes to strike on goal from close range. The ball took a wicked deflection off Victoria William’s and looped into the back of Rachel Laws’s goal.

The Blues had two great chances to sow up the game deep into the six minutes of added time – Katie Chapman hit the post and Eni Aluko flashed a venomous right-footer across Law’s goal but the ball, inched wide of the far post.

There’s were no changes by either side at half-time.

Chelsea boss Emma Hayes decided to give Claire Rafferty a run out in her final match for the Blues on 58 minutes. She replaced Jonna Andersson. Rafferty announced on her social media account on Friday she was leaving the Blues at the end of the season.

There is still the offer of a one-year deal on the table, but the announcement may alert other clubs of her availability next season – especially as the restructure of the league will bring in new clubs.

Next to enter the fray was FA Cup Final hero Ramona Bachmann for Kirby, Bachmann scored twice in that Wembley final against Arsenal in a 3-1 win.

Chapman left the field with eight minutes to go to great applause from their home crowd.

Kiera Ramshow scored with four main utes left on the clock to give the Blues a scare.