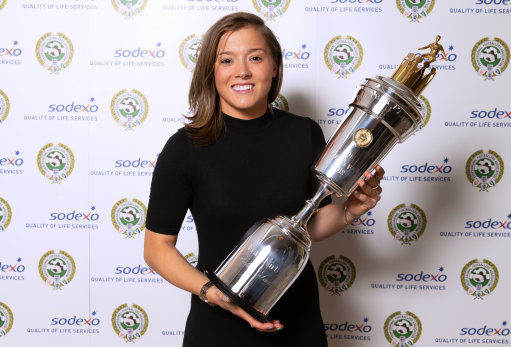 Chelsea super striker Fran Kirby was named as the best female footballer in the country  tonight at a glittering Professional Footballers Association (PFA) ceremony at the Grovesnor  Hotel.

The Women’s Players’ Player of the Year award came from the players themselves and Kirby, 24, said: “It is very humbling for me. I have to say a massive thank you to everyone who voted for me, it is great that people don’t mind me scoring against them once in a while.

“I am really happy to win this award and thank you to my team-mates who have enabled me to be in this position. Coming back off a long-term injury, the main thing was to play as much as I could and I have done that and I want to win as much as I can with Chelsea and hopefully with England as well.’

Chelsea Ladies manager Emma Hayes said recently: ‘Fran is back to her best level after suffering a terrible injury and she deserves credit for the work she’s done behind the scenes, when no one is looking, the determination she has shown to get her to this place.

‘She’s shown the quality of her finishing, which we all knew about her, but people need to credit the amount of running she does off the ball, especially with the schedule we’ve had. As far as I’m concerned she’s the best English attacking player in the country – and by a country mile.’

Second was Kirby’s team-mates Ji with Mjelde third. Also nominated on the short-list  were Ramona Bachmann and Millie Bright.