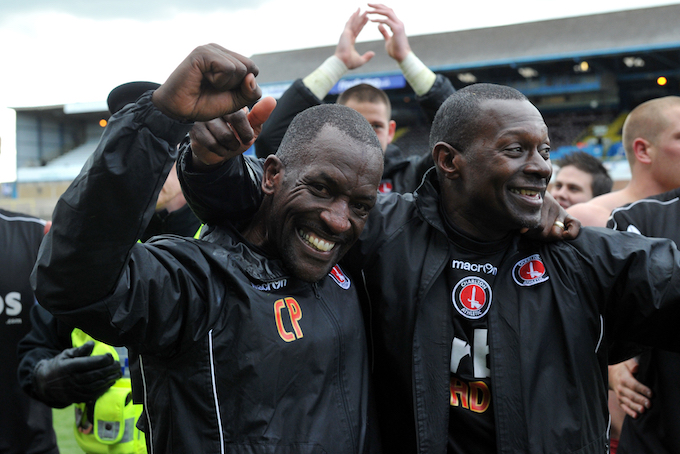 Chris Powell has spoken about being appointed Charlton Athletic boss – his first managerial appointment – in January 2011.

The South Londoner – who won five caps for England – led the Addicks to the League One title in the 2011-12 season.

He was sacked in March 2014, just months after Roland Duchatelet bought the club.

Here he tells The Coaches’ Voices about the settling in process at Charlton Athletic.

My first six months gave me time to look at the squad. Time to see the disconnect between the club and the fans. There was a downbeat feeling that I knew we could change if we got the supporters on side.

That summer we signed 16 players.

It was a bold step but I felt I needed to do it. The club needed new heroes. A new way of thinking.

People say that players need time to gel, but we put a lot of planning and foresight into our recruitment to make sure that time was as brief as possible.

We made sure that the players we brought in could handle not only playing in League One, but that if things went well, could stay with us in the Championship. I wanted players who I felt could grow organically, with the club.

I knew from my time as a Charlton player what that club can be like with momentum. That next season we really got it going. When that happens, it feels like you’re riding the crest of a wave and you can just keep on going.

It’s something every manager wants to have. And it took us all the way to the League One title.

Over the next 18 months, things changed.

We had a strong first season in the Championship, just missing out on the playoffs. But we couldn’t build on it.

At the beginning of 2014 the club got a new owner. I knew things weren’t great on the pitch. And I knew that when takeovers happen, invariably there’s a change of manager.

But I could see the way things were going and I was scared for the identity of the club.

People were very dismissive of the players we had. There was an idea of parachuting in players from other clubs to play in the Championship.

I’d tell them: They need to be able to play at this level. It’s unique. Tough. Relentless.

During my last few months as manager, I had to shield a lot of what was going on off the field from the players. Sadly, I had to keep it away from the fans and my staff, too.

I took a lot of it on myself, which was tough.

But it was a time that helped me to understand one of the key factors to being successful as a manager.

Your relationship with your owner and the people that run the club is key. It really is.

Ultimately, you’re judged on what you do as a football club and what results you get. And you’ve got to have that link – that relationship – to make the whole thing work.

I left Charlton disappointed with how my time there ended. But I also left knowing that feeling of being a manager was one I wanted to have again.

It didn’t feel strange anymore. It felt like I belonged.

The full interview with Powell can be read at https://www.coachesvoice.com