It’s true what they say here. Stepping from the busy street into St John’s churchyard in Waterloo, the air is noticeably cleaner.

This year, the award-winning church garden became one of London’s latest emission-busting open spaces. It is one of a number of urban gardens that have begun combatting pollution with canny planting.

Last Thursday, the minister for parks and green spaces came down, shovel in hand, to see what all the fuss was about.

Rishi Sunak MP met with church members and heard about a garden working for the community — and some surprising planting techniques.

Kneeling by a Japanese laurel, head gardener Viv Williamson explained the principle. “This is what’s going to do it,” she said, stroking the leaves on the yellow-green shrub about a foot above the soil.

“With the fatsias, the lilac, and the other shrubs we’ve got up here, we’ll be creating a wall. The pollution will be held back by the foliage. You don’t have to have very tall plants to do it — they can be hedge sized.” 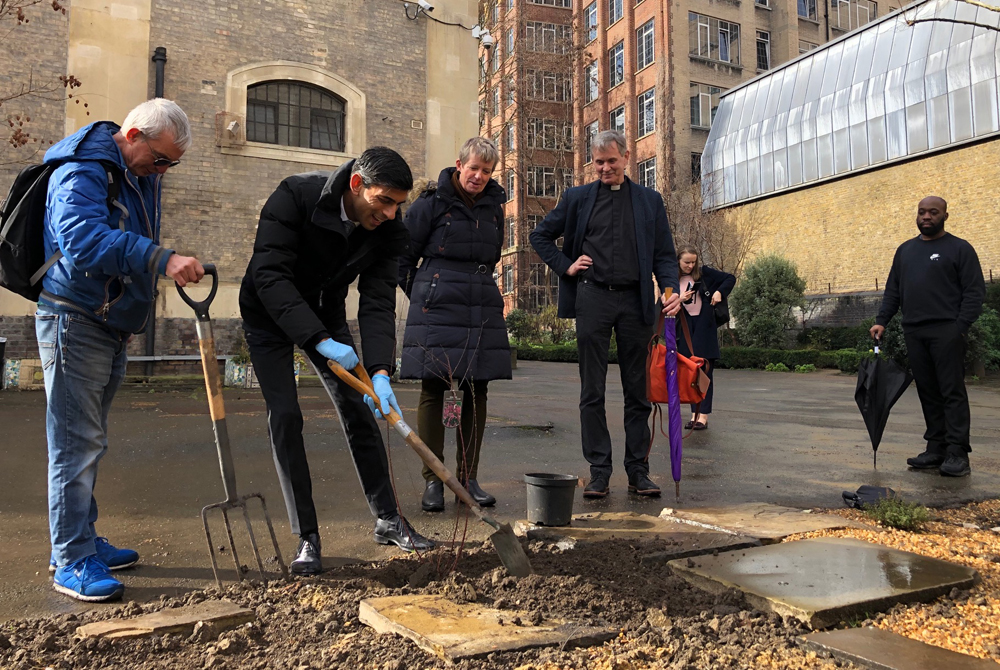 The idea sounds simple: fast-growing shrubs with dense foliage block pollution from the street. But it’s backed up by hard science.

Viv and a team of volunteer gardeners took inspiration from a clean air conference held in the church last year. Academics from the University of Surrey presented a remarkable discovery: Planting trees, they found, does nothing to reduce roadside pollution.

Trees combat pollutants overall, but not at street-level. Picture their shape: there is little foliage on the ground. Their high branches trap pollution beneath the canopy and keep it down at nose level.

Hedges, on the other hand, can cut harmful black carbon by up to 63 per cent at breathing height. They block and filter road-level exhaust fumes, slowing down airflow and catching pollutants on their leaves.

Shrubs like those Viv has planted — ones that quickly form hedges with thick foliage – are ideal.

“It’s not going to do the job immediately,” she cautioned. “We need to give things time – gardening is not a quick fix. But we’re starting off small and growing. We’re just planting a seed.”

Viv realised the need for action as soon as she took up the post at St John’s last year. Pollution is a serious problem here.

Neighbouring Southwark was ranked one of the worst polluted boroughs in London last week, with nitrogen dioxide levels more than twice the safe limit.

St John’s itself is just steps away from the congested IMAX roundabout. When Viv first arrived, she was shocked by what she saw.

“In the summer, you can see the pollution just flowing in,” she said. “The sun catches it in the light. You can literally see it coming in off the road.

“One of the first things I thought was ‘we’ve got to do something about that’.”

The community stands to benefit from her work. All kinds of people walk through the garden: doing their shopping, rushing through on their way to work, taking their dogs for a walk, or picking up the kids from school.

“I think all of those people will see the work we’ve done now in the garden taking effect over the years,” she said.

With the minister’s visit, people seem to be taking notice already. The garden has won a Silver at London in Bloom and a Green Flag award for sustainability and involving the community.

But last Thursday’s visit was the first to acknowledge the flowerbeds here as pollution-fighters. “It’s a great day for the garden when we get that kind of recognition,” Viv said.