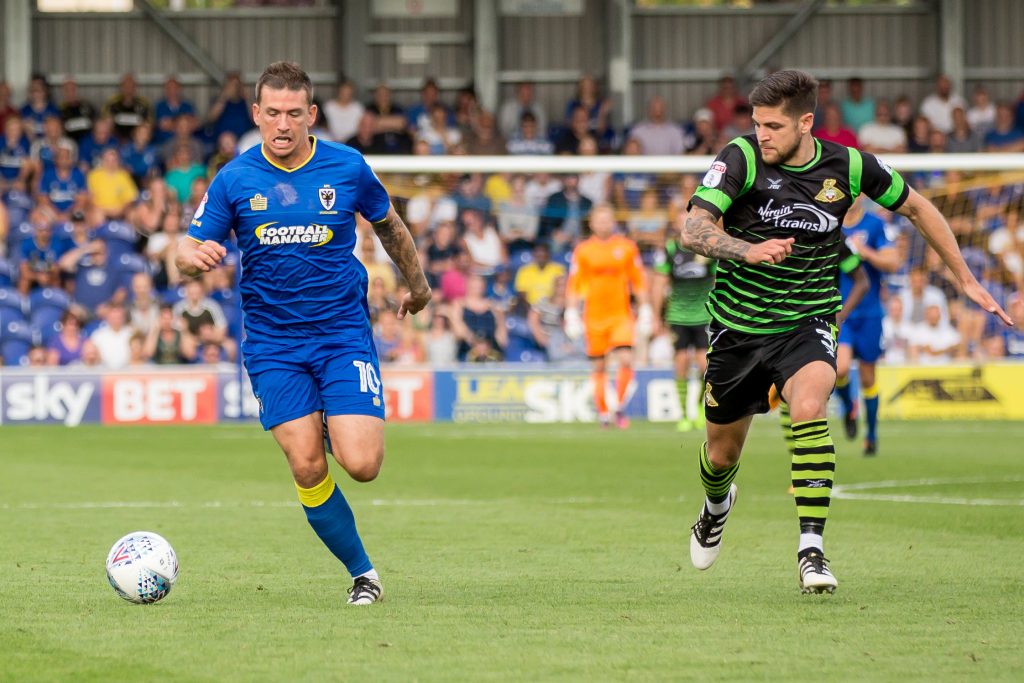 Cody McDonald reckons the Football League’s switch to the yellow winter football could be the break he needs to rediscover his scoring touch.

The summer signing has yet to score in League One for AFC Wimbledon with his only goal coming in a 4-3 EFL Trophy win at Barnet on August 29.

But McDonald, who hit 81 goals in 222 appearances for Gillingham, has the experience to ride out his lean spell which now stretches to 15 matches.

He said: “I’ve gone through little periods like this before where I haven’t scored, maybe not this long.

“I was having a little joke with the lad that I’ve been having a torrid with the white football but now the yellow one is about. I’ve looked back at my career and I seem to have scored a lot of goals just before Christmas and in the second half of seasons.

“It’s just coincidence, something that has tended to happen. I’m not going to get too down about things, it only takes a nice little tap-in to get the ball rolling.

“I’ve really enjoyed it at Wimbledon under the staff and manager. I’m disappointed I haven’t scored as many as I’d like to.

“In recent games I’ve been getting a few more chances. It feels like just a matter of time before I’m hitting the back of the net. I’m confident they will come.

“We really have been playing a lot better lately. On Saturday against Lincoln City the manager has gone two up front – which helps me. It is how I prefer to play.”

Wimbledon did not look like they lacked firepower with the summer additions of McDonald and Kwesi Appiah from Crystal Palace. The latter could be out until around the festive period with a hamstring problem.

Fans’ favourite Lyle Taylor ended his own barren run with a hat-trick against Rotherham United in mid-October.

“When Kwesi got injured he was on a good little run,” said McDonald. “That didn’t help the team at that time.

“But we’ve got other people to step up to the plate. Lyle has got four goals in as many games. He has been brimming with confidence. Hopefully I’ll start chipping in soon too.”

Witham-born McDonald has had three stints with Gillingham – two of those loans – but opted to leave the Kent outfit and sign for Wimbledon on July 1.

“They offered me a year and I felt at this time of my career that I needed a bit more stability,” he said. “I’m only 31 – which is not old – and I look after myself.

“The older you get the more you try and do things right in terms of recovery after games. Your muscles do ache a bit more. But I still feel fresh. If I had to put an age on how long I’ve got left then the mid-30s would be good.But I’m just focused on this contract with Wimbledon.

“I wanted a two-year contract and Gillingham weren’t happy do that. I had nearly signed for Wimbledon a few seasons ago, I met with Neal [Ardley] back then. It was a touch-and-go decision whether to come. In the end I went with my gut to stay at Gillingham.

“I couldn’t let the chance go this time.

“I’ve always played my best football at Gillingham. It was a hard call but I am looking forward to a new challenge at Wimbledon.

“It would’ve felt a little bit better scoring a few more and winning a few more games. It’s not all about me. It’s about the team.

“It is a tight league. Every single season I seem to be saying the same. But if we get two or three wins then you can jump 10 places and be sitting right before Christmas.

“Sunday’s match against Peterborough is important. It can kick us on. We haven’t been playing terribly and haven’t been outplayed a lot of times.”

McDonald’s crack at the professional game came at 22. He joined Dartford Town in October 2008 and by February of the following year had landed a dream switch to Norwich City after 14 goals in 15 outings in the Isthmian League Premier Division.

“I was working full-time as a scaffolder,” said the Dons frontman. “February 2, 2009 – the transfer window got extended by a couple of days because the deadline fell on the weekend. I signed for Norwich on the final day.

“I’ll never forget the date. It was a life-changing experience. It was something I had always wanted to do and I felt my chance had gone. I stopped playing football for two months, I just left my local team Witham.

“I got a phonecall that Dartford wanted me to come and train and I ended up signing there.”

McDonald is an Arsenal fan and Charlton Athletic are the obstacle which Wimbledon need to overcome to reach the FA Cup third round and a potential chance to land the north London giants.

He was an unused substitute for Coventry City when they were smashed 6-1 at the Gunners’ home.

“Another go at Arsenal would be a dream for me – or a match at Wembley.

“Charlton is a good draw. We’d maybe have fancied a lesser team at home but if you want a big third round match you’ve usually got to beat a strong side along the way.

“We played them a couple of weeks ago and there definitely wasn’t a lot in it. With the match being at home it definitely gives us more of an advantage.”