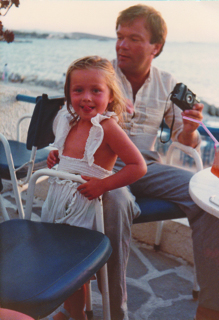 A bereaved family is demanding a full investigation into the death of their daughter Colette McCulloch, who was run over and killed by a lorry while living in a private mental health care home.

Colette McCulloch had suffered mental health problems from the age of 12 with obsessive compulsive disorder and anorexia and was autistic – though this was not diagnosed until she was 33, two years before she died in the early hours on a dual carriageway.

Coroner Ian Pears has widened the terms of his inquest after suggesting at a pre-inquest review in December 2016 that he would look at the death solely as a road traffic accident. Colette’s parents Andy and Amanda McCulloch, from New Cross, are now campaigning for a different corner to head the inquest and to examine how she came to be on the A1 dual carriageway, at 2.30 am, when she should have been in her mental health unit.

Andy McCulloch, an actor and scriptwriter for BBC drama Sleepers, as well as Dr Who and Heartbeat for many years, is running a crowdfunding appeal to raise £10,000 for a probe into Colette’s death. Colette’s older sister Chloe, of Nunhead, ran the Royal Parks Marathon in October 2016 and 2017, raising more than £4,000 for Lambeth and Southwark Mind and Autistica.

But now the family’s attention is on trying to hold the authorities accountable for what happened to Colette. Amanda and Andy are due to meet their MP, Vicky Foxcroft, to discuss with her what can be done to gain an open human rights inquest. “We feel legal aid and a full inquest should be available for all bereaved families, for deaths in mental health institutions,” said Andy.

They are being advised by the charity Inquest, which specialises in state-related deaths, and the National Autistic Society, whose president Jane Asher said: “There can be nothing more terrible than the death of one’s child, except fearing that it might have been prevented. If there’s any possibility a lack of care for this vulnerable young woman contributed to her death, it’s essential that we learn from her tragedy.”

Her parents have not been involved in three investigations by public bodies, including a safeguarding review. Solicitor for the McCulloch family, Merry Varney, partner in Leigh Day’s human rights office, has now asked for the coroner to be replaced, citing “the complete loss of confidence and trust of the bereaved family in Ian Pears.”

Colette was accepted by privately-run Milton Park Therapeutic Campus near Bedford, which specialised in autism. “They said they could treat her,” said Andy. “It turned out that they couldn’t keep her safe”. Colette was found to be dyslexic while at Honeywell Primary School in Clapham. Her OCD and anorexia became worse during her time at secondary school.

“She managed to take her A -levels, despite weighing only four and a half stone – and hospitalised a year later. Most of the next four years she was in and out of the Eating Disorder Unit run by the Maudsley Hospital, Camberwell. She nearly died several times but Professor Janet Treasure and her team saved her life. In those days, the link between anorexia and autism had not been established.

She went to Sussex University to study English Literature aged 26. Andy said: “She was lonely and depressed after she left. She self harmed and began using alcohol to escape from her phobias.

“She couldn’t see the consequences of her actions. But when she was diagnosed with autism, aged 33, we started to understand her self destructive patterns.” Sussex Partnership NHS Trust placed her in a specialist autism unit in Bedfordshire, Pathway House, run by Milton Therapeutic Campus. “They said they could treat her, but we feel 45 minutes with the psychologist per week and the odd group, was not enough”, said her father.

Amanda added: “She was allowed out but she started to stay away for hours at a time without permission. We told the clinic we were very worried for her safety but they seemed unable to care for her.”

Six weeks before her death, she had jumped off a bridge into the river and had to be rushed to A&E. Her psychiatrist at Pathway House described her action as “being with suicidal intent”. Its staff insist they told health chiefs and police repeatedly about their concerns. Pathway House say they had served her with an eviction order to try and force the trust to speed up the process. Sussex Partnership NHS Trust looked for a new placement.

Her father said: “They found her a new place. But change is highly distressing for an autistic person. She died a week before the move. “Colette’s death is not just another statistic to be swept under the carpet. She had an extraordinary mind. She could have had a life. She was very talented. She painted, drew and wrote extraordinary poetry.

Pears said: “It would be inappropriate for me to comment while the chief coroner is considering the family’s request.”

A spokesperson for Pathway House said: “Our priority at all times is the wellbeing, safety and health of the people we support. We raised concerns about her many times with the health authorities and police.”

A spokesman for Sussex Partnership NHS Foundation Trust said: “We would like to offer our sincere condolences to the family for their tragic loss. The scope of any inquest is the jurisdiction of the coroner and we will co-operate fully, as we always do. We have reviewed the way we monitor the care of people who have been placed in specialist units outside of our local area. We cannot comment further.” To donate, go to https://www.crowdjustice.com/case/justice-for-colette/.